First the shipbuilding illness that Russia’s Navy inherited from the USSR, which I call ‘distributed classality,’ looks set to continue. This is a procurement disease whose symptoms include building numerous ship classes, in small batches, with similar missions and displacement. Project numbers are produced in series of 2-4 ships prior to radically changing the ship design, or launching a new ship class of similar type. The Russian Navy’s frigate and especially corvette construction program has honorably continued this tradition.

There is a new ‘heavy corvette’ design in the works (project 23800) displacing well over 2000 tons, probably more towards 3500-4000. This is probably the consequence of a general dissatisfaction with the performance and characteristics of the Steregushchiy-class corvette (project 20380) which began at 2200 tons. We should recall the current trajectory of this corvette design. The first ship of the modified project 20385 Gremyashchiy, originally meant to use German MTU engines, was just recently launched at around 2500 tons. Meanwhile project 20386 Derzky which includes substantial redesign and a ‘stealthy’ look was laid down for an estimated 3400 tons displacement.

The debate on whether Russia needs any more ships in the 2000 ton displacement range continues, and while the experience of ship designs from early and mid-2000 may indicate that it clearly does not, Russian shipyards need to build something. Keep in mind current smaller corvette/missile boat classes in the 800-1500 ton range include Buyan-M, Bykov large patrol ships, and the more promising Karakurt (project 22800).

Karakurt looks like a better and more compact design of what Buyan-M was supposed to be, with two currently under construction, and yet Zelenodolsk is still building 4 more Buyan-Ms.

Apparently Krilovsky design bureau presented a fantastical design for yet another 2000 ton corvette called Briz. This ship would make 30 knots, pack a 100mm gun, 32 short + 16 long air defense missiles, and 24 Kalibr/Oniks land attack missiles in VLS tubes, along with Paket anti-submarine torpedoes. There’s nothing to dislike except that its somewhat impossible to have all these features, and a helicopter to boot, in a 2000 ton displacement corvette. The ship design is no doubt based on new physical principles to have so many capabilities and a displacement smaller than the base Steregushchiy-class.

Just as the current corvette classes are too small, and are getting bigger, the same goes for frigates. The absence of gas turbines from Ukraine stalled out Gorshkov-class frigate production at two, and created an opportunity for further expansion of the design to the ‘Super-Gorshkov.’ That suggests there will be 2-4 Gorshkov-class frigates in this series, and then something new that’s at least 1000 tons larger. The Gorshkov redesign is a problem turned into a feature in Russian naval procurement. Super-Gorshkov is moving forward as a reality, perhaps going up as high as 7000-8000 tons in displacement.

This would substantially expand the current Gorshkov design and raise questions as to whether or not Russia really needs a new destroyer. In truth, the upcoming state armament program GPV 2018-2025 is probably not going to fund a single Leader-class, but it may pay for several ‘super-Gorshkovs’ which could be considered a cheaper, more practical, and less exuberant platform that will still have potent capabilities (once they get air defenses to work).

It seems the Navy is narrowing its prospective fleet of amphibious ships, all of which currently exist in plastic model form, down to two amphibious variants: a 15,000 ton LPD that will be able to operate in the Arctic, and a larger up to 35,000 ton universal amphibious assault ship. Several variants have been disclosed, including ‘Priboi’ and ‘Lavina’ as a sample of the potential projects proposed. Priboi is expected to cost 40 billion RUB, displace 14,000 tons, and have a deck capable of carrying 8 helicopters. Meanwhile Lavina is larger in the 23,000-24,000 ton range, carrying 16 helicopters. However it’s unclear whether either of these designs are in the final two being examined by the Russian Navy. 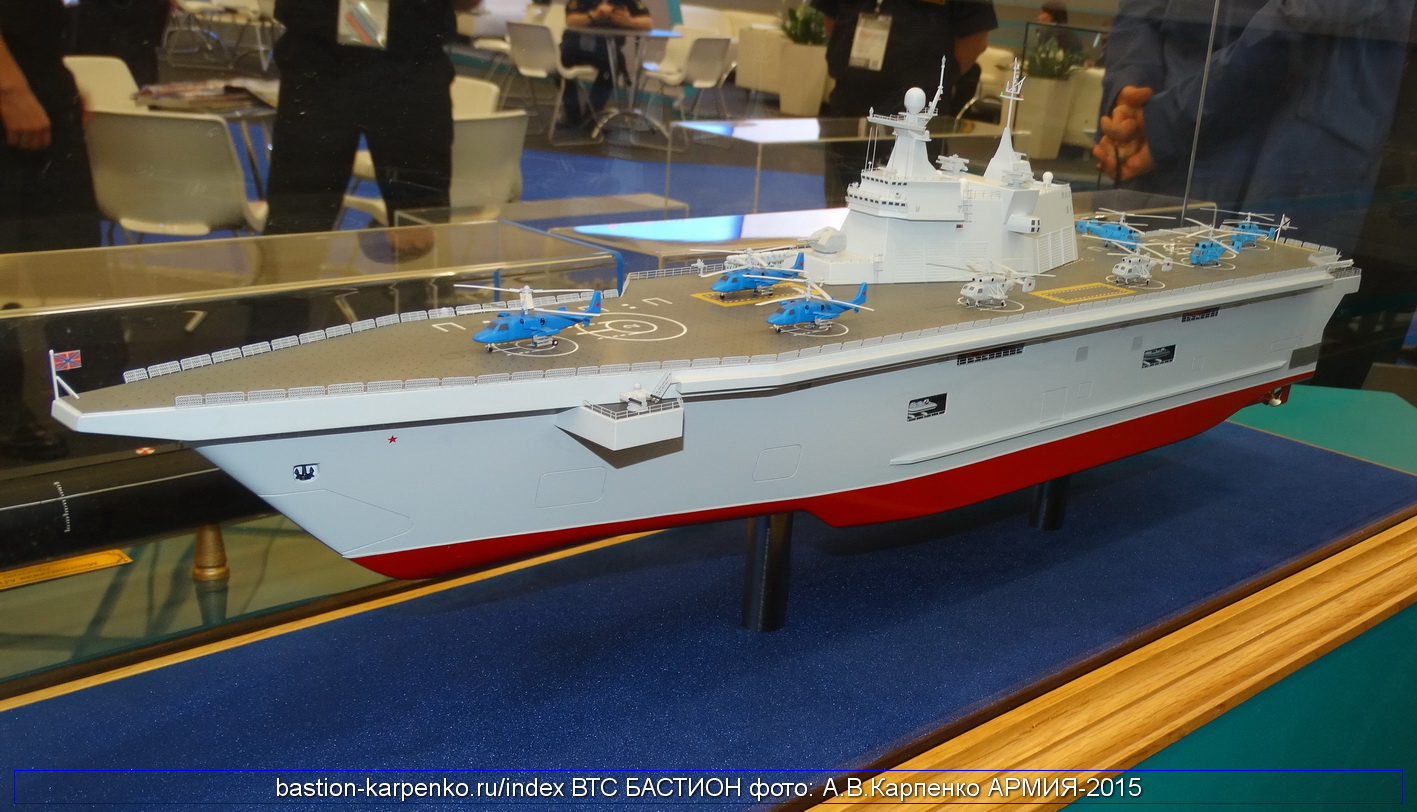 Info above gathered from several blogs and accounts of what was presented at the salon, including from Constantin Bogdanov’s at Lenta.ru