It’s become common knowledge that a U.S. strike took out an advancing column of Syrian forces on February 7th in defense of SDF positions east of Deir ez-Zor, and more likely to protect U.S. SOF embedded with them. Since then the story of Russian casualties among supporting PMCs (mercenaries belonging to private military companies) has proliferated across the internet and newspaper articles, with many of the facts and figures inaccurate. I’ve seen 100 dead, 200 dead, 600 dead, dozens, hundreds, scores of dead, and so on and so forth. Unfortunately Russian casualties, troops participating in military exercises, or similar such events have a large “applied internet multiplier” whereby they increase several fold depending on the source. By current figures many of those involved in the fighting February 7-8 were killed at least twice, if not multiple times.

Due to a lack of credible information serious newspapers are citing some Russian businessman, a Syrian commander, and all sorts of other conflicting sources. The contradictory stories are reminiscent of Akira Kurosawa’s famous film Rashomon, where every character has their own often self-serving narrative about the same event. After a journalist called this morning to inquire whether it is true that U.S. airpower took out 20% of Russian ground forces in Syria it seems time for something sensible to be written on the matter. I’m updating this a bit as better information comes out.

Based on the information available at the time I wrote that actual casualties among PMCs in this episode are likely somewhere on the order of 13-15 dead and a relatively equal number wounded. Initial reporting seemed closer to a dozen than dozens. The casualties  from this strike are spread between a Syrian unit known as ISIS Hunters (~20 KIA) and the bulk among SAA units which seemed to include some percentage of local fighters from the area (these numbers might be around 40 or more). There was word of a Syrian brigadier killed as well along with the SAA soldiers. More than likely this was an unit from Syria’s 5th Assault Corps supported by PMCs. The 13-15 PMC casualties are also not all necessarily Russian, but thus far all the confirmed dead are. A good number seem to be Cossacks, and many are fighters who previously were part of separatist formations in the Donbas, either directly on behalf of DNR or under contract as mercs.

I am very biased towards conservative assessments based on the information that can be confirmed, and makes sense, i.e. I prefer starting low and working my way up. In this case it seems that the less probable event was true, the number of Wagner mercenaries killed was much higher than I initially thought.

On Feb 16 I updated the count after more information and some additions from fighting February 10th. The better number increasingly looked like ~40 dead and 70 wounded as in MK article. I’m more inclined towards MK numbers in this graphic than any of the other figures, but it is still too low an estimate. Those are figures for combined casualties, referencing 3 companies of Wagner involved in support of Syrian forces. Of these the number of PMCs killed and wounded is probably more than a dozen but doubtfully exceeds 30-40 (or so I thought). Today the more realistic number is somewhere between 100-200 killed in that engagement.

A good source comparison chart to figure out where all these numbers are coming from can be found here: https://chervonec-001.livejournal.com/2227259.html

The KIA count may go up depending on the fate of the wounded. There is a general assumption based on the evidence that the few PMCs killed belong to Wagner ChVK, as Wagner is the principal mercenary group fighting in support of SAA in Syria. As is often the case, facts point to a much less exciting and sensational story behind the headlines.

According to DoD statements, and those by SecDef Mattis, the attacking force approximated ‘300 pro-regime forces’ in a surprise push towards SDF positions on February 7. Thus, the fantastic figures of hundreds dead, including Igor Girkin’s 644, can be safely thrown out the window. Somewhere on the order of 200 dead is also improbable unless the numbers for those attacking were much higher than being reported by the American side. The U.S. would have to kill literally everyone involved, and that seems quite a reach for typical rules of engagement. But it seems the numbers were somewhere 100-200 after all, that is the reporting from Russia and numerous sources suggest the U.S. intentionally under reported Russian PMC casualties in this fight. Either that, or the additional fighters died from poor morale after seeing the strike.

Later on, DoD statements elaborated that the attack came evening of Feb 7th, and it included a ‘dismounted battalion sized element’ which was turned back. So this is somewhere on the order of 300-500 attacking but they only had contact with a part of the force. The difference in the numbers between Mattis’ initial 300 and LTG Harrigan’s battalion is in the leading half of the battalion, which dismounted (200-300), that U.S. forces struck and most of the casualties were among this element.

Since LTG Harrigan indicated the attack was not unexpected, and they observed the buildup for some time (https://www.defense.gov/News/Transcripts/Transcript-View/Article/1441080/department-of-defense-press-briefing-by-lieutenant-general-harrigian-via-teleco/), it explains better how so many assets were involved in beating back the assault – MQ-9, F-15E, F-22, even B-52 and AC-130. B-52 in particular would take some time to arrive on station. This suggests the U.S. knew the attack was coming, and they told the Russians they knew, and the action went forward anyway.

This episode appears to have taken place around Al-Tabiyeh east of Deir ez-Zor. Syrian forces began an attack on SDF positions, with armor and artillery. Then U.S. forces made contact with Russian MoD to deconflict, and after being told there were no Russian soldiers there, which by all accounts there were not, they struck the advancing units. So, initially I thought total casualties were probably less than 100 with a approximately 40 SAA, 20 ISIS Hunters, and 13-15 PMC split (although unclear if SAA losses include ISIS Hunters losses in which case it might even more conservative). Now looking back, that was grossly conservative. Somewhere between 100-200 were killed, many of them Wagner fighters, that is more than the 42-70 estimate from the MK story.

The exact reason for why this episode took place is naturally unclear, but it may be connected to the overall friction between Syrian forces wanting to seize energy infrastructure, gas and oil, from SDF forces. The latter took it from ISIS, and of course need the resources, just as the Syrian regime needs the money to sustain a rump state. There are also Russian interests there looming in the background, among people interested in contracts handling Syrian energy extraction post-conflict, and hoping that PMCs can secure potential energy cash cows. This episode may be due to poor coordination, deliberate probing, or as often happens in war – a confluence of events yields compound risk as mistakes and misjudgments stack.

From higher altitude, the U.S. has a strategy to maintain presence in Syria via SDF, and Russia has a strategy to make the regime as viable as possible financially, while pushing U.S. proxies further east. Astride the war between Turkey and Kurds playing out in Afrin, the war between Israel and U.S. vs Iranian presence in the south, this is technically Syria’s war #3 which involves Russian forces backing SAA to retake more of Idlib and gain ground east of Deir ez-Zor.

P.S. Behind this tale is another looming story about some Syrian T-72 that was taken out by a U.S. MQ-9 Reaper drone in defense of SDF positions and embedded U.S. advisers (internet can’t decide if its Russian or Soviet made). Actually on the video available it first looked more like a T-90, supplied by Russia to Syria’s 5th Assault Corps. There is an object right of the gun that looks like a Shtora system than IR illuminator from T-72BA – but this was not the case. https://www.military.com/daily-news/2018/02/13/us-mq-9-reaper-takes-out-russian-t-72-tank-syria.html (I got this photo from the same article)

Looking at it some more later the V barrier on the front seems to point to T-72M, which is the more probable answer. This is is from Feb 10 fighting. 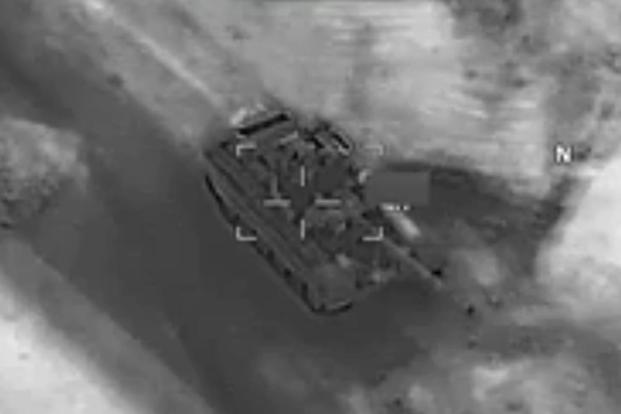 We stand by to find out from the internet whether this particular tank was filled with hundreds of Russian PMCs or personally driven by Minister of Defense Sergei Shoigu.

Figures compiled from a few news sources like Novaya Gazeta, Meduza, etc. some blog sources that are ‘pro-Russian’ but fairly well informed on the situation in Syria, work put out by CIT, other journalists/experts currently working the issue)

5th Corps 122mm M-1938 (M-30) howitzer milliseconds before being hit by Coalition aircraft after pounding SDF positions near Khusham, Eastern Syria. These airstrikes are believed to have resulted in the death of 12 Russian Wagner PMC and another 36 wounded. pic.twitter.com/QYHx9F2V8B