DIA’s recently released report on Russia Military Power is an interesting offering. In the 1980s, it’s forerunner titled Soviet Military Power served two purposes: first highlight the Soviet threat (typically exaggerating it to make a strong argument for defense spending) and second inform the public discussion on Soviet capabilities. This report does some of the former, and a bit of the latter. Disappointingly it is of lower production quality, lacking many of the maps, graphics, and photos that Soviet Military Power came with (my favorites among the old graphics were big manly Soviet ICBMs drawn next to very small American ICBMs). Thus, the report already achieves a part of it’s mission: demonstrating why we need more funding for higher quality reports on Russian Military Power.

Soviet Military Power 1983 (this is how you do it right)

Soviet Military Power had no footnotes, and did not identify which agency had produced it, while this report has hundreds of footnotes to Russian authors, journalists, and even wikipedia. In this respect it is not distinguishable from other think tank products on the Russian military, and some respects compares poorly to Sweden’s FOI reports titled “Russian Military Capability” in terms of information offered. Below I discuss the better parts of the report, what it gets wrong, and key issues to consider when thinking about Russian military power.

On the whole the report seems a misspent opportunity. It offers some interesting bits of knowledge on the contemporary history of Russian armed forces, reforms, and current thinking on doctrine. However, one cannot read this product and walk away with an appreciable knowledge on the size, disposition, or capabilities of Russian armed forces. Those worried about a high end fight in the Baltics, or anywhere else for that matter, are best off reading FOI’s work or that of informed blogs in order to understand Russia’s order of battle, force posture, and the like.

The report presents vignettes, deep dives into subjects like Russia’s gas turbine production, yet nothing in terms of a functional order of battle. You may learn that a VDV division now has a company of T-72 tanks, but not how many troops are in the VDV and where they’re based. What can Russia really do? What does it plan to do? Does it have the forces to realize these ambitions, etc. remain open ended questions. This report has a a lot of sporadic information on what is happening, but is quite poor in explanations for why any of these changes, procurement, or deployments have taken place.

Things that are kind of wrong (a few samples):

Numbers without context are difficult to analyze. Is this number of satellites how many they need to sustain a functional network? How are recent launches doing? What is the average number of years a Russian satellite can stay up? Oh, and how is the new satellite early warning network going? (figures from the report below) 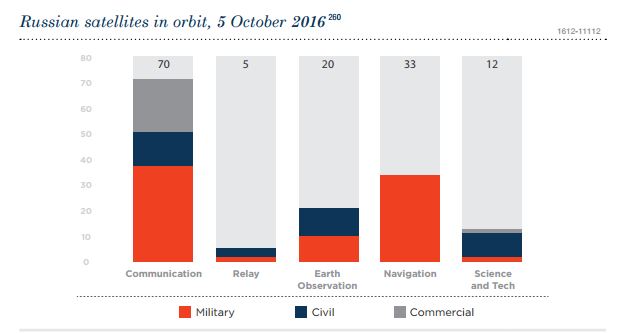 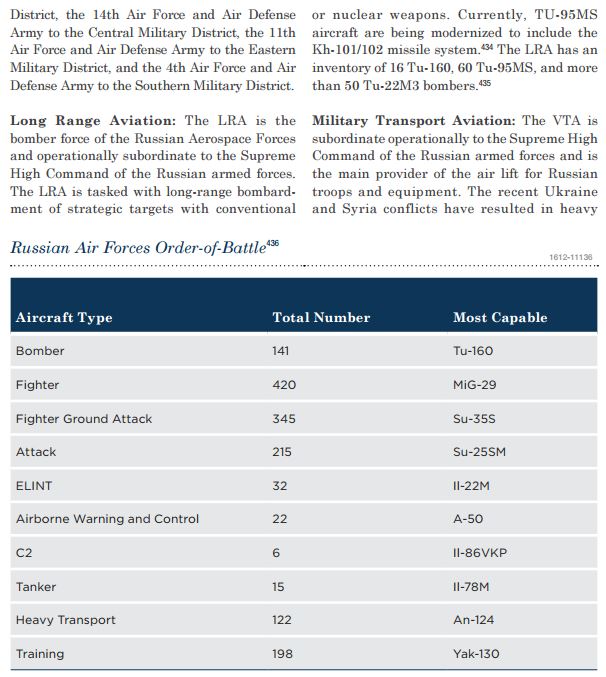 Things to consider when ruminating on Russian Military Power:

Remember all the new divisions and ground force formations being created post-2014, and units shifted back to where they were prior to the 2008-2012 reforms:

With DIA’s Russian Military Power out one can only hope that Russia will release its own response, which during the Cold War was called “Whence the threat to peace,” so that we can return to that old familiar publication tit for tat. Bottom line, this is not a bad start, but on the whole DIA’s publication greatly lags it’s predecessor, and raises more questions than answers when it comes to Russian military power.

Great discussion of Russia’s State Armament Program 2018-2025, defense budget, procurement, and many other topics of interest, hosted by CSIS Russia Program. Tomas Malmlof leads off the talk, my points come in at the 46 minute mark in this conversation, and Olga Oliker moderates the discussion.

IHS Janes’s story “Russia announces deepest budget cuts since 1990s” got a lot of attention this week, claiming the Russian defense budget will be reduced by $1 trillion rubles or 25%. It is also wrong and has a bombastic headline to boot.  Here is a concise assessment of Russia’s defense budget, the cuts, and the reasons.

Bottom line, the Russian defense budget is going from 3.09 trillion RUB in 2016, to 2.84 trillion RUB in 2017, a reduction of ~7%, which about 1-2% harsher than announced in October of last year. The original estimate for the 2017-2019 budget plan was a 6% reduction over that period of defense spending. The cuts amount to about 250 billion RUB. Including planned cuts for the coming two years, the 3 year average is still a ~6% reduction.

The Russian defense budget is undergoing a sequester to tamp down growth, but is not experiencing large scale cuts, especially relative to other federal departments who were dealt 10% reductions.

The defense budget in 2016 was 3.09 trillion RUB. However, Russia had a problem with debt in the defense industrial complex. Manufacturers had been withdrawing commercial loans to cover the costs of production (i.e. they must have been producing on IOUs from the MoD), but this resulted in financing costs, and those costs were being carried over into the price of equipment being produced. This was no small issue, the interest rate + inflation resulted in some notable costs to the manufacturers, and financing this debt was having a waterfall effect on the state armament program.

Eventually the ministry of finance had to pay them down, so in December 2016 they made a onetime payment of 700 billion RUB to clear this debt (though some sources average it up to 800 billion). Added to 3.09 budgeted, this brought the overall amount spent on national defense to ~3.9 trillion RUB in 2016. Statistically, that resulted in a spike of spending to 4.7% of GDP, but in reality an important chunk was this singular debt payment.

The budget figures announced for 2017 reduce the budget by 7%, to 2.84 trillion. Janes did the following math, 3.9 trillion – 2.84 = 1 trillion RUB reduction or -25%.  To put it mildly, that is not the right interpretation of what is happening. The annual planned reduction is really just north of 200 billion RUB.

The future planned reductions are much smaller at 3.2% in 2018, and 4.8% for 2019. This would amount to 3% and 2.8% of GDP respectively, and perhaps 17% of the government budget. Though the figures do not include other spending on national security. My understanding is that these were based on really low oil prices of 40/barrel as well.

However, based on the past two years the defense budget is probably going to be reduced by less. 2015 saw only a 3.8% reduction, and 2016 a 5% reduction, relative to much louder announcements. Meaning, we should expect MoD to claw back some % points from Ministry of Finance planning. Here IHS Janes also seems to indicate that the 2017 defense budget is the first significant reduction after a period of extended growth, when in reality it is the 3rd straight year of budget reductions, and when everything is reconciled, the degree to which it is a reduction is debatable.

We should note there is always inflation, which is a tax on everything, and it is steadily eating away at the budget. The real sequester is the inflation rate that the budget must absorb.

I would add that by spending to reduce the defense sector’s debt, the MoD in reality has also reduced its procurement costs for the future so it’s unclear how the 7% reduction in the budget plays out relative to likely lower purchase prices since the budget is no longer forced to absorb financing costs for these debts. In conclusion, the Russian defense budget will remain very much alive, while the state armament program will continue to truck along with reduced expectations.

NOTE: I edited this article from originally saying the 2015 budget was 3.07 tril to 3.09 tril – with minor adjustments that follow, but the conclusions remain.

Because budget and spending figures are not that exciting, below I offer a photo of our chief budget analyst, my dog Ivan.