Russian forces concluded the exercise and began making preparations for the trip back to their respective bases. Vostok 2018 was designed to test the readiness of Russia’s armed forces and supporting civilian infrastructure to move units over large distances, coordination between ground forces and the Navy. It was also another command-staff exercise where officers could gain experience in combined arms maneuver and joint operations in conjunction with other services. Emphasis was placed on quickly forming groupings of forces in the TVD (theater of military operations), moving units East, setting up communications and logistics, etc.

This will be a brief post, as there’s not much to report on, but the announcements made by Russian generals and press on troops returning were of interest. They revealed the likely numbers behind the exercise as quite smaller. Once the event is over I intend to do a brief recap of what we saw that was of interest. Special thanks to colleagues Kate Baughman and Jeff Edmonds who helped put some of the information together behind this coverage of Vostok 2018.

Motor rifle units getting ready to head back

Russia’s Minister of Defense Sergey Shoigu announced that ‘strategic maneuvers,’ or a similar such exercise, might be held every five years. He linked  it to the five-year implementation of the State Armament Program. The connection is somewhat difficult to understand, since there’s no visible linkage to the SAP (GPV 2018-2027). It may be some internal benchmark being established for performance of new equipment, or simply an idea being pitched to do ‘strategic maneuvers’ every five years. Shoigu also suggested that the MoD would release a performance assessment from the exercise sometime in October.

Central MD – General-Lieutenant Alexander Lapin, commander of Central MD, gave out medals to 50 officers for their performance during Vostok. During the ceremony he announced that Central MD successfully moved 7,000 troops to Tsugol range for the exercise. Given the exercise consisted of Central and Eastern MD, if Central only contributed about 7,000 in ground forces (this is two brigades or one division’s worth of soldiers), it raises questions as to who brought the other 293,000 to this event – or to put another way, Vostok was clearly several times smaller in scope than advertised.

Here is a small table showing some of the fantastical official figures reported by Russia’s MoD for different exercises over the years. Note Zapad is always tiny because of Vienna Document filing requirements, and Vostok is always outrageously large.

Other news include a communications brigade belonging to 2nd CAA returning home from Tsugol training range. This unit, consisting of ~1000 soldiers, was responsible for providing encrypted communications during the exercise. The 2nd CAA also fielded about 2000 motor riflemen, with T-72B3 tanks, BMP-2s, BM-21, and other equipment – also coming back from Tsugol.

Note: Southern MD, not to be outdone, is planning to hold an entire series of 30 battalion tactical trainings (BTU) – which seems to be something Col General Alexander Dvornikov is instituting. Exercises will last through October 31st, emphasizing combined arms maneuver, and inter service coordination. Supposedly 45,000 troops will be involved in these drills, the goal of which will be to test all of the BTGs that Southern MD can field. Gen Dvornkikov, who heads Southern MD, has emphasized recon-strike + recon fire contours, and ‘lessons from Syria’ throughout comments and quotes on events taking place in Southern MD (and he’s got comments for almost every press release).

Eastern MD – A battalion tactical group of motor riflemen from the 41st CAA, based near Keremovo Oblast, is heading home. This unit had 1000 soldiers and ~300 pieces of equipment, including BTR-82A APCs and T-72B3 tanks. Again, a BTG or two from 41st CAA sounds about right in terms of participation.

Northern Fleet – A surface action group led by Udaloy-class Vice-Admiral Kulakov conducted another amphibious landing exercise near the port Egvekinot on Chukotka. The Arctic brigade detachment they had unloaded earlier, which had conducted a land march to the port, served as an opposing force for Russian naval infantry. Recall the Arctic units made a 270km raid inland and had met up with the fleet at a different point on the Pacific coast. Two LSTs, together with Ka-27 helicopters, unloaded several units of naval infantry on BTR-80s onto the beach. The naval infantry and Arctic brigade units fought each other, simulating amphibious assault and coastal defense. Those unfamiliar with this popular destination for amphibious landings can inspect the map below. 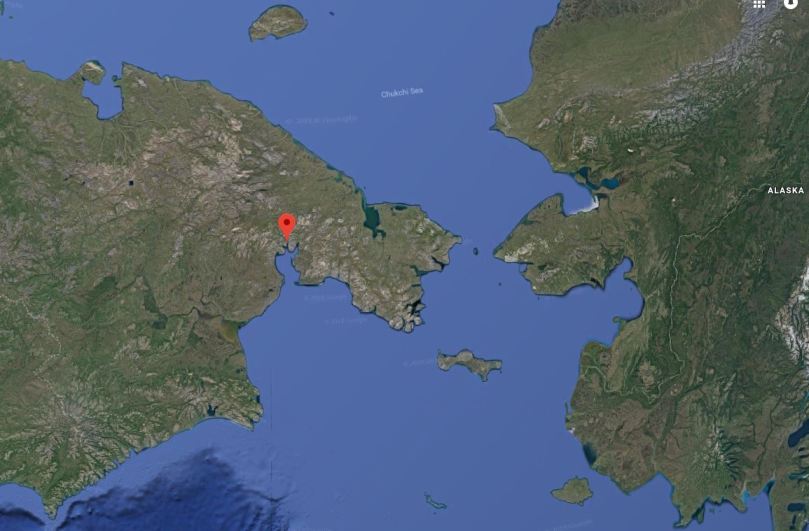 In a previous post I had not discussed that alongside the three announced divisions around Ukraine, Russia’s General Staff also planned a fourth in Chelyabinsk oblast.  This division has at times been announced as part of “Russia’s response to NATO” though its location naturally tells us otherwise given it is right across the border from Kazakhstan.  First news of it came in late January 2016. Adding to the spread of divisions is the recent announcement on August 23rd from a Ministry of Defense meeting that there is another division in the works for 2018.  A press report from the recently held meeting revealed that the General Staff intends to form a coastal defense division on Chukotka.

I’ve compiled the history and background of these changes from a few news announcements, including posts from colleagues and other blogs on the subject, such as bmpd, eagle_rost, and one of the better takes out there written by Aleksei Ramm on Defence.ru

The 7th Independent Armor Brigade in Chebarkul (Chelyabinsk oblast) will be converted into a division – this unit is part of the Central Military District. This brigade is one of the two remnants of the 15th Tank Division, which was moved back to Russia form Czechoslovakia in 1991.  Later in 2004 the division was disbanded, leaving two regiments that would become the core of a new division, the 34th, headquartered in Ekaterinburg.  During the 2009 reforms, which led to the consolidation, displacement or disbanding of numerous units across Russia, all divisions were turned into brigades.  Hence the 34th was broken into two brigades, the 28th Motor Rifle which stayed in Ekaterinburg, and the 7th Armor in Chebarkul.  The region hosts a sprawling military base not far from the border with Kazakhstan.

The division’s structure will include the following elements: 1 motor rifle regiment, 1 self-propelled artillery regiment, 1 air defense ‘division’, a reconnaissance and an engineering battalion, along with several supporting units of smaller size.  It was not officially stated, but we should venture an assumption that the tanks of the 7th will be included in a tank regiment as part of the new division.  Suffice it to say, this does not match a six regiment Soviet division, though it looks close to the 2nd or 4th half divisions which also have two regiments.  In Aleksei Ramm’s view, because this unit only has one motor rifle regiment and an air defense ‘division’ in place of a full regiment, it is simply an expanded combined arms brigade.  It’s chief accomplishment is a larger staff and a substantially larger artillery compliment than a normal brigade would have.  There is no timetable for completing this unit formation, but I suspect late 2017 is a good date to go by given the timetable for the other divisions announced.

A recap of why Russia is recreating divisions: The concept is to have an organization with the staff and logistics base that would allow brigades to send tactical battalion groups to the front, making the division a  management rung  below that of the combined arms army, i.e. Military District -> Combined Arms Army -> Division HQ-> regiment or battalion tactical group.  Brigades are too small to take in battalions from other brigades and command or support them.  Hence divisions may prove the most useful tell of where the Russian military expects the need for task organized formations.  Russia’s force structure remains in an experimental state, absorbing the experiences of the last two years, but its becoming clear that brigades remain the force generating component while divisions are the task organizing command and support structure for expected contingencies.

Turning to the far east – a new division on Chukotka is a bit of a surprise since it is about as remote piece of real estate for a base as one can find in Russia.  This will not be a combined arms division, but likely a coastal defense unit integrating various missile fires and artillery units under one command.  The principal motivation was the decision back in July 2015 to create a unified coastal defense system from Primorye to the Arctic.  It’s objective is to effect “sea control” (or in reality sea denial) over the littorals by Kuril Islands, the Bering Strait, and defend Russia’s ballistic missile submarines stationed in the Pacific Fleet.  Of note, two of Russia’s new Borei-class SSBNs have arrived to start replacing the rather ancient Delta IIIs stationed there. 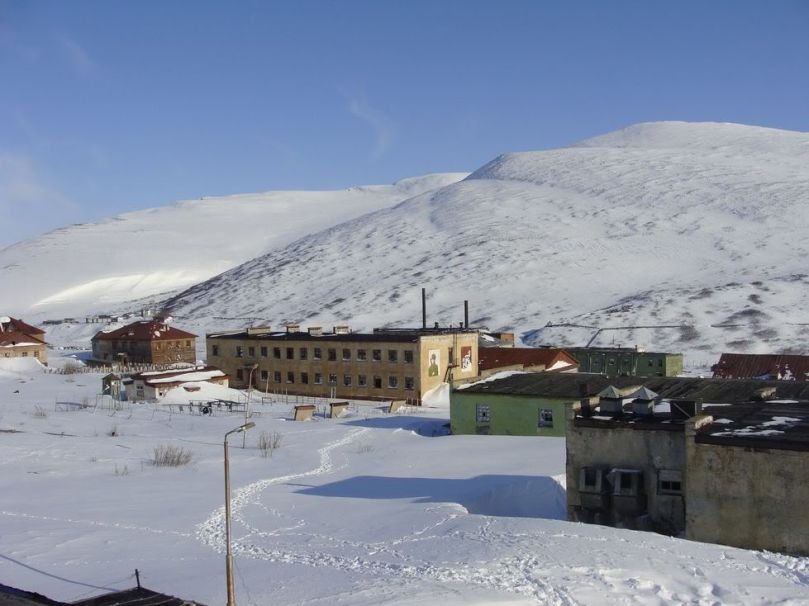 According to the announcement the Pacific fleet had conducted a survey from April to June of this year of two Kuril islands for suitability to host garrisons, namely Matua and Paramushir.  It’s unclear how that statement connects to the formation of the division in Chukotka, except that it will likely extend coastal defense from the Kurils all the way to the Bering Strait.  Russia has already invested heavily in reinforcing the A2/AD systems on the Kuril Islands since that chain forms the outer boundary of the SSBN bastion in the Pacific.

Another photo of abandoned ‘Gydim’ an unofficial name of the military town by Anadyr where once nuclear warheads were stored, presumably in summer time, when it is more ‘cheerful’ (my implication is not that Gydim will be reactivated, or Anadyr will once more help host the division, but simply to speak to the efficacy of establishing bases in these remote regions).  Photo from Alexander Belenkiy’s blog.

Some history offered by bmpd blog on Russian military presence in Chukotka: under Stalin in 1947-53 Chukotka hosted the 14th Army, but this unit was disbanded promptly after his death.  Subsequently in the 1980s the 99th motor rifle division was based here, although it was only manned at cadre levels.  That unit was eventually disbanded in 1994.  A Russian military base in Gydim has become a ghost town, like many other Soviet towns and bases sprawling across the country’s less inhabitable regions.  It is an attraction for photo adventurers who are drawn to abandoned buildings and Soviet military infrastructure.  Photos of what was left of Russian military presence on Chukotka are illustrative of how expensive, and arguably wasteful, establishing a sizable contingent there would be.

Although it may have a stronger rationale than the string of bases in the Arctic, this plan seems to entail burying substantial money into the snow.  Those stationed on Chukotka will be able to reflect positively only on the fact that they were not stationed on Novaya Zemlya.  More than likely this new coastal defense division will also be presented as ‘Russia’s answer to NATO’ and in Western press be characterized as militarization of the Far East.  In reality it will further integrate various artillery and missile units in the region, and perhaps extend the A2/AD layer north of the Kuril island chain towards the Bering strait.