Thoughts and a quick overview of what is known about the fire that took place aboard AS-31 Losharik (referenced as AS-12 in most stories). Also some clarifications since there are conflicting media narratives and facts surrounding this developing story.

BLUF: On July 1 the Russian special purpose submarine project 10831, AS-31 ‘Losharik’, designated as a nuclear deep-sea station (атомная глубоководная станция) suffered a catastrophic fire killing 14 crewmen, with 4 survivors (at first I heard 5 were rescued). The submarine itself seems to have been not far from its base and was towed back. The now official version as I understand it suggests that the fire occurred at fairly shallow depths (at 280m), originating in the battery compartment of the submarine. The cause was a short circuit in the electrical system. Details are unclear but the gist of it is that while the fire started in the battery compartment, the cause was electrical. Supposedly Losharik was conducting bathymetric surveys in the Barents (that’s the official story anyway). Most of the crew died from inhalation of noxious fumes/smoke attempting to save the submarine – this story retold in IZ.

Update as of July 10th: Fontanka which does great investigative journalism ran a story based on several sources claiming that the cause of the fire, and subsequent explosion, was a lithium-ion battery aboard the submarine. Losharik was docking at the time with the carrier submarine, though according to this story it was BS-136 Orenburg (this bit is unlikely since Orenburg is out of service). The battery was used to power  Losharik’s maneuvering systems (this bit kind of made sense, still unclear why the energy from the reactor was not sufficient). According to Fontanka, the submarine recently received a lithium ion battery, which experienced a short circuit during docking operations. This in turn led to a rapid discharge, overheating, and an explosion in the battery compartment. The resulting fire killed all crew members in the first three compartments of the submarine.

Apparently, having little prior experience with lithium ion batteries on submarine, beyond project 677 Lada, which is yet to undergo serial production, they put a Li-ion battery onto Losharik. The advantage of this battery type is that it does not produce hydrogen gas, which must be contained and removed on diesel-electric submarines. BMPD blog ran a great commentary as to the ridiculousness of placing this type of battery onto a submarine so early into development, compared to the Japanese who invested decades into this technology. I’m no expert on batteries so will withhold judgment as to whether or not installing this type of battery, without extensive testing on other submarines, made sense.

Barents Observer ran a story based on sightings by some fishermen as retold in a local news paper, they claim the submarine surfaced near Ura Bay around 9:30 pm (northwest of the entrance to Kola Bay), although this sighting may have been of the carrier submarine BS-64 Podmoskovye. They of course didn’t want to be identified because they were out fishing illegally. I’m skeptical of first hand accounts from fishermen late at night. Media tend to jump on these eye witness tales, but such stories tend to be of questionable veracity.

Most of the versions of this narrative I’ve heard suggest Losharik was quite close to its base, operating near home waters. A subsequent story indicates that there was a civilian on board, and this individual was evacuated prior to the crew’s decision to close the hatch to prevent the fire from spreading – supposedly the died not from the fire but noxious gas inhalation.

On July 5th Putin met again with Shoigu, where Shoigu reported that they are still assessing the timelines and scope of work required to carry out repairs, but given the nuclear reactor compartment was not damaged, he was optimistic the submarine could be made operational within a fairly short time. He further confirmed the fire began in the battery section of the ship and spread from there. In his characteristic style Shoigu said that repairs were not only possible but absolutely necessary. We will see how long it actually takes to get AS-31 operational again.

Electrical fires are not uncommon aboard submarines, as are fires stemming from battery compartments. This problem plagues the Russian submarine service more so than Western counterparts. Of course it is also possible that the Russian MoD has come up with a straightforward explanation for what caused the fire in order to give the media a plausible story to run with, while we do not know what actually happened given the nature and mission of this submarine. Hence the story of some sort of short circuit or electrical arcing leading to a fire makes sense, but at the same time should be taken with some skepticism. Russian submariners carry gas masks and personal life saving kit on them at all times specifically for such incidents.

At first glance the crew complement for that voyage appears unusually composed of senior officers. This is not that unusual for GUGI which is a small, officer heavy service, with technical and engineering specialists. Everyone aboard such a vessel could be an officer given the technical or scientific expertise required, and it could be that such a large number of captains are actually detailed to AS-31.

However it is difficult to believe that the typical compliment, 20-25 crewmen, would consist of 7 Captains first rank, including two who had been awarded as heroes of the Russian Federation (Filin and Dolonsky), unless they were conducting some important research mission or perhaps test. Standard complement or not, either way, the deaths of these senior officers are likely to be a great loss not just for the Russian Navy, but also for GUGI’s technical efforts.

The official casualty list can be found here. It shows a loss of 7 captains first rank, 3 captains second rank, 1 Lt Col from the medical service, two captains third rank, and a captain-lieutenant. I think comparisons to Kursk are unhelpful, and out of place here, but it is a significant tragedy for the Russian submarine service. The crew belongs to GUGI’s military unit 45707 based in St. Petersburg. The two captains who held Hero of the Russian Federation honors earned them as part of earlier research missions in the Arctic and Antarctic. Captain 1st Rank Dolonsky was the actual captain of the submarine.

AS-31 is an unarmed submarine designed for special missions, examination or installation of infrastructure along the ocean floor, research, measurement, and the like. It’s an ideal undersea salvage craft to pick up various bits of technology, munitions, or sensors that sink to the bottom. Yes it can locate or probably cut undersea cables. The submarine has retractable arms to manipulate objects, but is not designed for advanced weapons testing. There is a different set of GUGI subs that perform this mission. The name Losharik is a nickname derived from the visual appearance of its specially designed pressure hull, composed of interlinked spherical compartments made of titanium.

HI Sutton does good cutaways and 3D models, although I fear that this resource is overused as a single-source of visuals on Russian special purpose subs. There’s a strong chance that the interior might not quite match what people imagine it to be. Still the cutaways are quite useful to get a general sense of what it might look like.

Rough specs based on conflicting sources, none of which especially agree with each other:

Losharik was developed during 1988-1990 by the Malakhit design bureau, built at Severodvinsk during the 1990s. Delayed due to financing, it entered service in 2003, and according to some sources was considered operational some years later. The submarine made a well known research voyage to chart the outer edges of Russia’s continental shelf at the Lomonosov and Mendeleev Ridges. According to one story Losharik sustained damage to its manipulable arms during this mission and underwent repair. The submarine then went through sea trials in 2017, together with BS-64 Podmoskovye, which was just launched in 2016.

Although BS-136 Orenburg is often cited as the carrier mother ship for Losharik, a modified Delta III SSBN, BS-136 is probably not operational and most expect this submarine to be officially retired. There was news as far back as 2013-2014 that BS-136 Orenburg was going to be written off in the near future. The submarine is too old to merit life extension, and is likely to be scrapped. Therefore the carrier is most probably BS-64 Podmoskovye which has been operational since 2017. I will edit this post later with links.

New photos from TASS show clearly it was BS-64 involved, as it is now parked at Severomorsk with a tent over the hatch, and vehicles surrounding it. 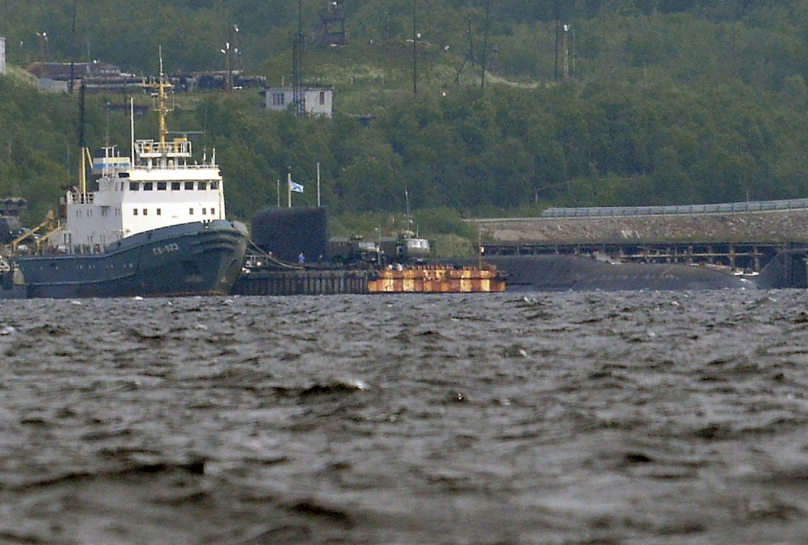 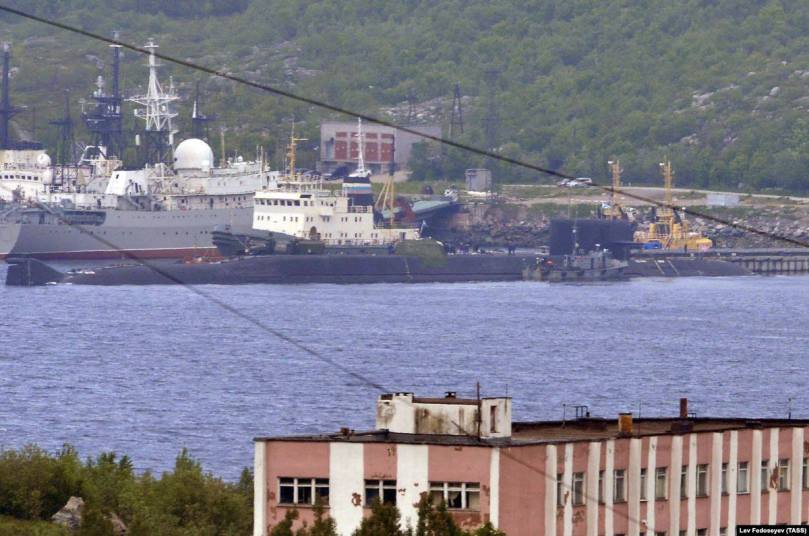 GUGI and the 29th Submarine Division

AS-31 belongs to GUGI, the Defense Ministry’s Main Directorate of Deep-Sea Research (10th Department). This is a specialized service that is not part of the regular Russian Navy, but answers directly to the Ministry of Defense as an intelligence and special missions organization. GUGI operates special purpose submarines, ocean going research ships (for example Yantar-class), and divers known as ‘hydronauts.’ Often media accounts conflate the work of GUGI, and its ships/submarines, with that of the regular Russian Navy, and it’s submarine force, which is not the case. 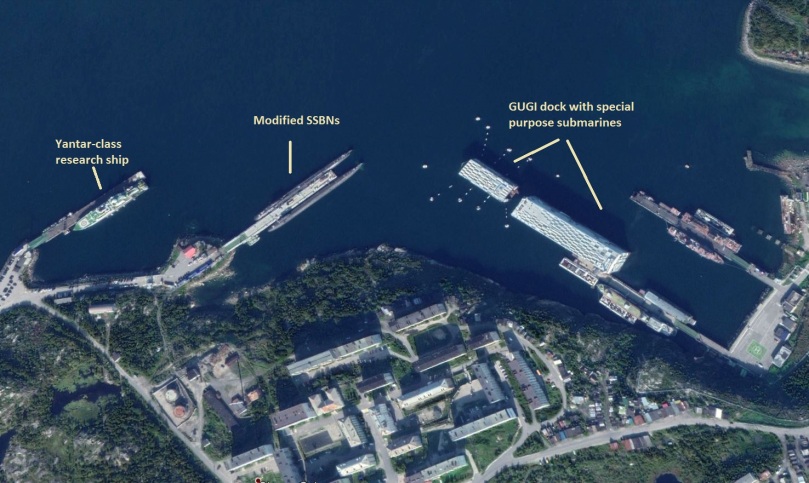 Losharik belongs to the 29th Submarine Division (previously listed as a separate brigade). This is a separate division in the Northern Fleet, based at Olenya Guba next to the town Polyarny. It is often erroneously reported as being at Severomorsk, or headquartered there, neither of which is true. The bay is near the main Northern Fleet submarine base of Gadzhiyevo on the Kola Peninsula. Other submarines of the 29th include the smaller special-purpose diesel-electric classes and larger modified motherships, based on reconfigured SSBN or SSGN hulls.

Submarines belonging to GUGI include:

Other special purpose submarines that may be associated with the service:

Concluding thoughts: It’s natural to ask what this tells us about the state of the Russian Navy or the submarine service, and the fair analytical answer is fairly little. GUGI and its ships are not part of the regular navy, they are not subject to the op tempo of exercises, patrols, etc. What we can see is that fires remain a problem aboard Russian submarines, even the most specialized ones with crews that consist entirely of experienced officers. This problem is more characteristic of the Russian submarine service. Other countries’ submarine services are great at crew training and maintenance, but have a tendency to run into things (no names). Unfortunately we’re not going to find out if the official story on the source of fire is true, or if some piece of boutique tech was the real cause.

Comments or suggested edits are welcome

7 thoughts on “Fire aboard AS-31 Losharik: Brief Overview”