The weekend was relatively quiet. Comparably few activities took place as the forces involved were either taking a break, or perhaps there was a media blackout compared to the information flowing about the first several days. For a brief period the MoD main website was down, which was unusual. However, other news sources which typically cover the exercises reflected a dearth of information for September 15-16. I’ve decided to group the events of both days into one post here. The main exercises over the weekend included another series of bombing raids by Russian aerospace forces, a motor rifle battalion assault at Tsugol, complex river crossing exercises supported by engineer and CBRN troops, and two naval exercises held by the Northern and Pacific Fleets.

VKS Aerospace Forces – Russian Tu-22M3s conducted another series of air raids at a training range in Zabaikal, practicing bombing runs against various targets simulating an enemy air base. It reads like this was another unguided bombing exercise, dropping FAB-500s and 250s. The precision guided munitions tend to be reserved for Syria, so they tend not to waste them on exercises. Ten air crews were involved in the event, though unclear if they all had their own individual platforms, i.e. 10 bombers, or were rotated through a smaller number of aircraft.

Meanwhile Russian Su-30SM heavy multirole fighters took on the role of incoming enemy fighters. They approached the integrated air defenses setup by Eastern MD, and not did not respond to ground control requests for identification. Mig-31BM and Su-35s fighters were scrambled to intercept, simulating air combat at different ranges, including short range dog fighting. The Su-30SMs were defeated by Eastern MD’s air superiority fighters.

Eastern MD – There was another motor rifle and armored assault at Tsugol, with T-62s setup as targets representing the opposing force. Several companies of T-72B1 tanks, in conjunction with BMP-2s conducted an attack across the range.

Meanwhile Russian military police units, mounted on Typhoon vehicles, detected and captured  a group of infiltrators who sought to gain access to the training range. 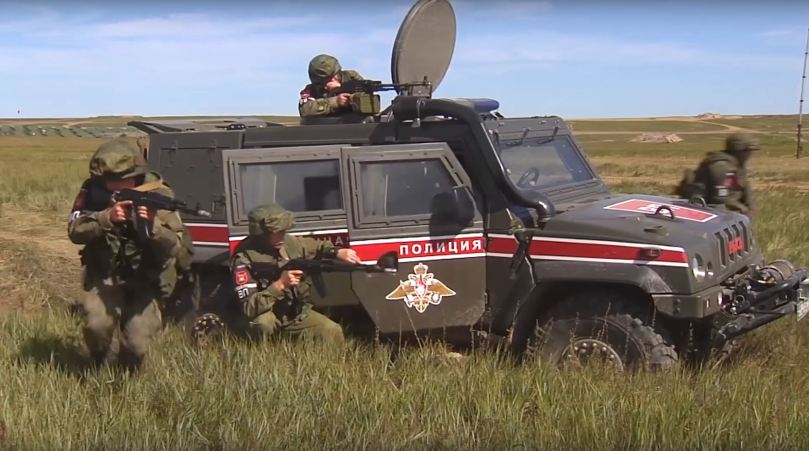 CBRN units setup smoke and aerosol cover for a river crossing exercise, where T-72 tanks forded the river with snorkels, while other vehicles were transported via specialized amphibious carriers. Engineer and sapper units established a pontoon bridge for tanks and BMPs to drive over. The exercise seems based around a motor rifle battalion, with helicopter support, effecting a river crossing both via bridge and in shallow places with its own means. 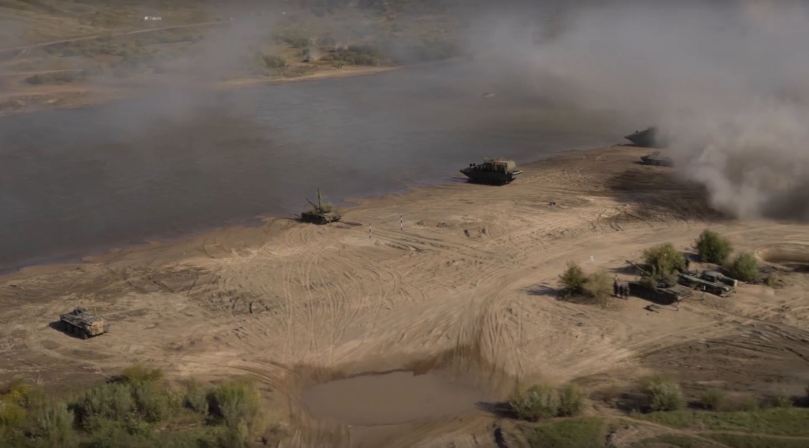 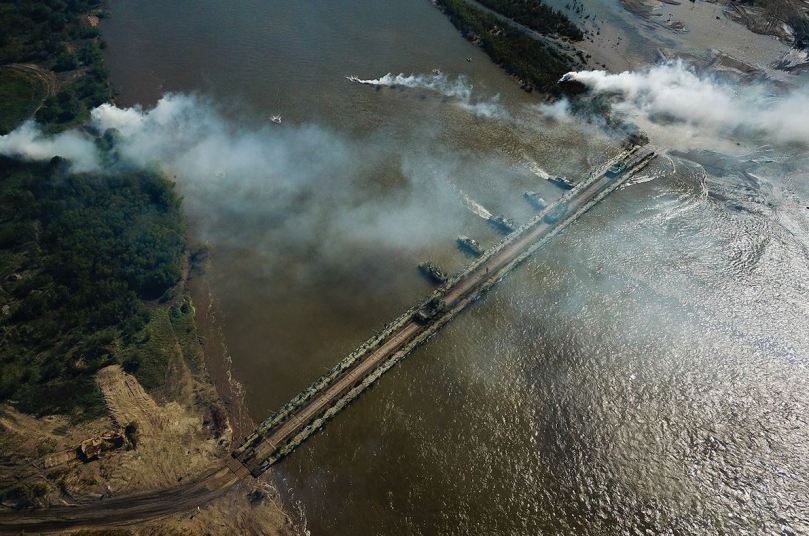 Other exercises of note: Russia’s Ministry of Emergencies held a joint exercise with Chinese counterparts, simulating a ship collision at a bridge being constructed across the Amur River. The exercise consisted of a Chinese passenger ship colliding with a Russian ship working on the bridge. Both sides worked together to put out a fire on the Chinese ship, evacuate passengers, and rescue others from the water. Russian Be-200 firefighting aircraft and Mi-8s  belonging to the Ministry were involved, with about 300 people all together engaged in this exercise. I found the event interesting simply because it reflects another level of cooperation between Russian and Chinese ministries along the border outside of the military dimension.

The Baltic Fleet has also been busy, though their activities doubtfully have anything to do with Vostok 2018. About 25 ships, 30 aircraft, helicopters, drones, and 50 pieces of equipment were involved in conducting an amphibious landing at Khmelevka. Russian Su-24 + Su-30SM fixed wing aircraft and Mi-24 helicopters conducted a strike against enemy positions, so that naval infantry units could then land and seize the beach. Ships involved included LSTs Aleksandr Shabalin, Korolev, Minsk, three smaller landing boats from project 21820, and support by three project 20380 corvettes (Stereguschiy). The landing force consisted of about 30 BTR-82A, which is consistent with what about 3 LSTs can carry, though at the same time they also air lifted several naval infantry units behind enemy lines – presumably via Ka-27 helicopters which is typically how these forces effect an amphibious assault.

Northern Fleet – The Northern Fleet ran an anti-submarine warfare exercise, with its principal combatant Vice Admiral Kulakov (Udaloy-class) leading the submarine hunt. Their scenario involved using different systems to hunt for the submarine, such as onboard sonar and the ship’s Ka-27PL helicopter. Kulakov practiced torpedo and depth charge attacks, along with evading torpedo attacks fired by the opposing submarine.

Pacific Fleet – Naval Infantry conducted an assault to enable a larger amphibious force to land near the Klerk training range on Primoriye. This is an interesting exercise in that they were working together VKS Aerospace Forces, who supported their attack, along with ships from the Pacific Fleet, combat aviation, artillery, sappers, and air defense units. Supposedly the next phase of this exercise will involve an air assault brigade of VDV Airborne conducting a similar type of attack, though it seems things are winding down. The Eastern MD is already looking to an upcoming joint exercise with Mongolian troops under a different title.

Some additional pictures of note: 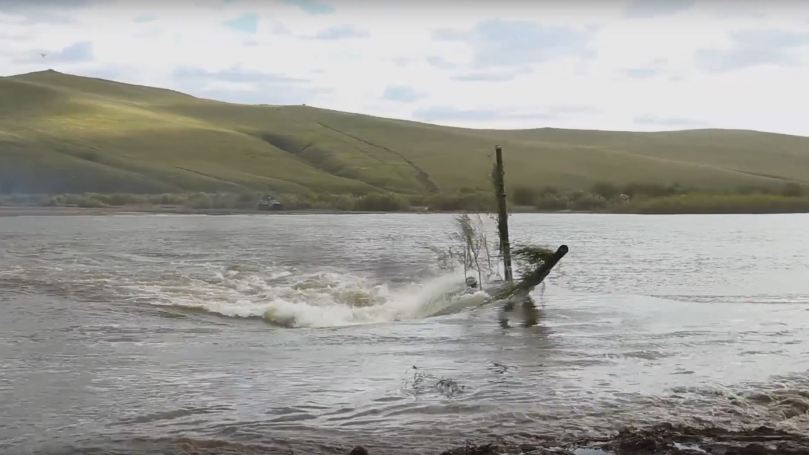