I covered Zapad 2017 extensively on this blog, in a day by day account back in September. The goal was to create a resource for the community, something everyone could look back to in their analysis for background. Recently I’ve been motivated to write a short analysis of Zapad, and why both before and after the exercise a lot of coverage got it wrong. There are important takeaways from this exercise, but as always, sensational accounts muddy the waters, and they regularly lead to people learning things that are not true.

German newspaper Bild recently published an amazing article, claiming that according to ‘two Western intelligence’ sources, Russia sought to invade the Baltics, Poland, Finland, Sweden, Norway, and bomb Germany, along with a host of other unsubstantiated claims. I wish to thank them, since their fantastical account of Zapad 2017 is the inspiration for this actual account of Zapad 2017. While it may be general knowledge that Zapad is historically an exercise aimed at a contingency with NATO, much of what Bild claimed is not only untrue, it simply does not make military sense. However, before we get to Bild’s ‘alternative history’ of what happened that is now being passed around twitter like so much other received wisdom, let’s discuss what truly took place this September.

Zapad is typically a two-phase scenario, where the proximate cause of conflict between Russia and NATO is Belarus (since Zapad-1999 when they began running these exercises again). The exercise often features a Russian defense against the supposed intervention, then horizontal and vertical escalation, followed by a substantial counter-attack against NATO. The purpose of the exercise is for the General Staff and national leadership to test the country’s ability to mobilize for a general war, gain experience in training and commanding the newly reformed armed forces, and in the big picture improve its coercive diplomacy vis-a-vis the United States by making clear Russia’s capability and resolve to use force if it’s core interests are challenged.

All those things held true this year, but the actual size of the exercise was much smaller than anticipated, both across Russia, and in the immediate Baltic region. Not 100,000 or any of the other inflated accounts suggesting similar numbers. As Gen. Ben Hodges (just retired), had noted the exercise was somewhere north of 40,000. According to Igor Sutyagin at RUSI 48,000 to be exact, with maybe 23,000 in the areas noted for Zapad exercises. I differ with his account slightly, as I think it was perhaps no more than 45,000 across Russia, while the immediate region should include the Baltic and exercises by the Northern Fleet.

The chief difference is really a narcissism of small differences – whether or not you factor in exercises in the Eastern MD, and foreign deployed troops in Abkhazia, South Ossetia, Tajikistan, Transnistria, etc. Subtract 3,000 listed for the exercise on Sakhalin and you’re probably at about 45,000. There were parallel exercises and annual checks scheduled for that time of year and it’s rather debatable what was part of the Zapad scenario versus what coincided. What is clear is that there are no credible sources out there arguing that the exercise was a massive test of a Russian invasion of NATO, or that 100,000 troops participated in the event (note I said credible).

Zapad 2017 was seemingly not only smaller than anticipated, it was likely smaller than expected in Russia as well, judging by the fact that the number of rail wagons ordered seemed to exceed the amount used by a considerable margin. That is, the original planning back in 2016 might have been for a larger event. Some explained this with a theory that Russia’s General Staff intended to send more forces to Belarus and was somehow turned away. There is nothing to support this version of events. Instead it is very likely that canned exercise press releases were pushed out, for units that at some point were nixed in planning, which may reveal earlier variations that never came to pass (along with the logistical planning for them).

For example, it may have been that the entire 1st Tank Guards Army was supposed to show at some point early in the planning (our press informed us of this dreaded army looming), but actually only select units participated in the exercise. The same goes for entire VDV divisions, which actually only contributed a handful of battalions. Unfortunately Russia’s official press is quite terrible, announcing a lot more on the day to Belarus than there actually was, and people frequently attribute malice to what is typically malpractice.

One possible reason Zapad 2017 was smaller this year is that it did not involve a major counter-attack against NATO forces, with a large scale deployment of 2nd echelon forces into the fight, which might come from Central MD. Although the 90th Tank Division did train as part of the exercise separately, it seems on the whole this event was focused on other matters, and in that way perhaps differs from Zapad 2013. It is also not a general fight against NATO, but a coalition of NATO members backed by the U.S. A distinction with a difference. So the fight was aimed at Poland, Lithuania, and the U.S. in support, based on the lead-in scenario for the exercise (bordering NATO states meddling in Belarus).

I will offer a cursory summary of the phases, although details on what happened during those days can be found in earlier entries on this blog.

The exercise demonstrated some core elements of Russian planning for long range conventional strikes with SRBMs and ground launched cruise missiles. This is both part of a conventional warding strike, and likely NSNW employment for escalation control. Russian medium bombers had a role on the last day, but strategic bombers were not involved according to announcements. There may have been a pair of Tu-95MS doing their typical flight past Norway on the last day, but this is not an uncommon occurrence.

I’m highly skeptical that long range aviation had any sort of nuclear attack mission in this exercise, especially since it makes little sense for them, or that the ICBM tests were truly a part of it given the nuclear forces exercise came later in the fall, i.e. all those things were tested and demonstrated to the West on a grander scale after Zapad. The strategic nuclear exercise traditionally follows the combined strategic exercise later in the year. Since Zapad-1999, Russia has on and off included nuclear signaling with strategic bomber aviation, but the intent behind it was to make a point to the United States. This is not a conversation Russia is having with Europe, but one it is having with Washington, since Russia principally sees NATO as a platsdarm for the projection of U.S. military power.

The fables of Russian bombers attacking this or that are often told after Russian exercises, typically by politicians, such as the supposedly simulated Tu-22M3 nuclear strike on Sweden from Zapad 2013, which also never made sense, and was not substantiated by anything. If anyone had a nuclear mission in this exercise it was likely the missile brigades belonging to ground forces.

Given the fear and panic spread in some circles ahead of Zapad, Russia needed fairly little to bolster its coercive credibility in being willing to use force, and follow through with conventional or nuclear escalation. That being said, the message was quite clear about Russian readiness and resolve were there to be a crisis in Belarus. In this respect Zapad was a success perhaps before it even began.

Now let’s get to Bild. This is what Bild thinks happened according to ‘two Western intelligence analysts.’ We can venture some guesses as to what country they’re from on the basis of how they saw these events unfold. This version of Zapad 2017 seems to be Putin’s operation #YOLO 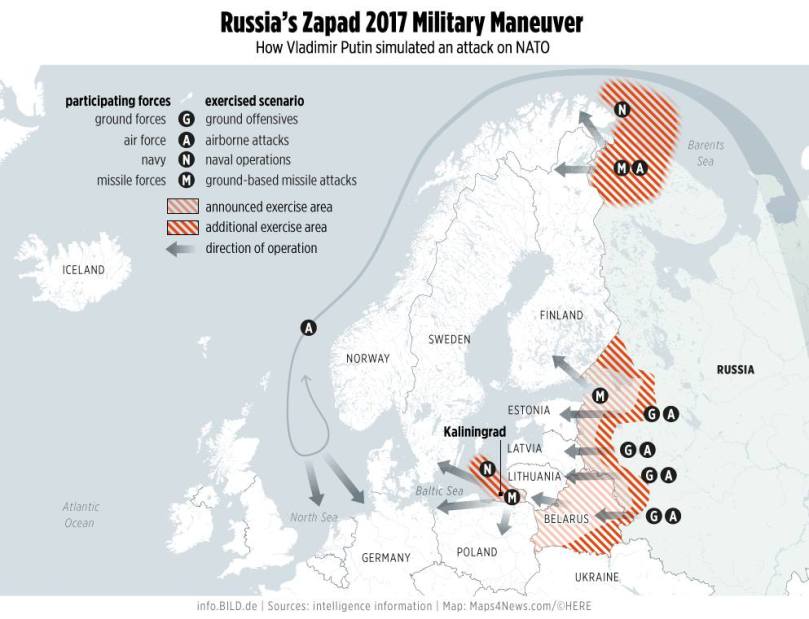 Unfortunately Bild’s account can only help further bolster Russia’s credibility and the mythologized capability of it’s armed forces. Here is what Bild wrote on the basis of mysterious intelligence sources:

This was the Russian amphibious landing exercise in the Baltic Sea: 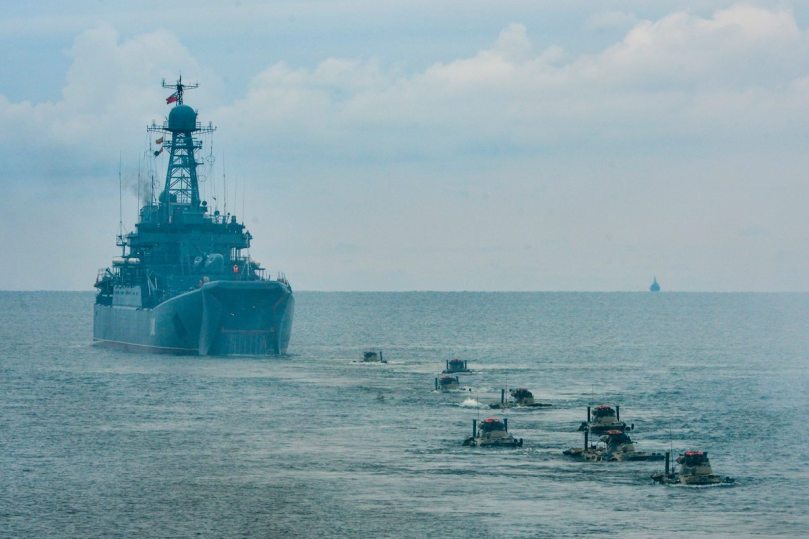 Bild’s account of what happened during Zapad 2017 seems closer to this picture below:

The Zapad exercise historically has a defensive and offensive component, as all strategic-operational exercises should, but 2017 appeared more limited in scale when it came to the ground force offensive/counterattack. Undoubtedly Russian forces crushed NATO in Belarus and saved Kaliningrad, but the rest of it seemed pretty conservative. Instead a strong emphasis was placed on fundamentals and functional areas of development: mobility and logistics, networking and communications, connecting ISR to fires, integrating aviation with ground attack, defense against aerospace attack, queuing and kill-chain development for long range fires, etc. For details you can look back to the day by day coverage in this blog from September.

As for what happened during Zapad 2017 according to twitter, and Bild, I can best illustrate using the imaginative renderings of Jakub Różalski –

7 thoughts on “What actually happened during Zapad 2017”