I’m going to skip the policy analysis and work on the facts of this strike and the Russian response. The al-Shayrat airbase was chosen because according to U.S. sources on April 4th a Syrian Su-22 deployed some kind of munition with chemical weapons.  On April 6th two U.S. destroyers fired 60 Tomahawk cruise missiles at the base, although technically it was 61 since one failed to launch and had to be replaced, while another missile ditched into the sea (60 planned – 1 launch fail, + 1 replacement, -1 malfunction resulting in sudden conversion into torpedo). The official story is that 59 hit targets.

What did the missiles hit? This base hosted two squadrons of Su-22M3/M4 bombers and one squadron of Mig-23ML/MLD fighters. For those who don’t know, these are legacy aircraft from the Soviet Union, long retired in Russia. If memory serves Su-22s were taken out of service in the Russian air force back in 1998, but are still flying in Poland.  These squadrons were distributed in three different parts of the airbase, and it looks like the missiles hit two out of three sectors. As a consequence they got 5 Su-22M3s, 1 Su-22M4, and 3 Mig-23ML fighters for a total of 9 aircraft destroyed (Pentagon claimed 20, but so far we can only count 9, then subsequently in a recent press release the Pentagon changed the story to 20% of Syrian air power destroyed.) The squadron of Su-22s located in the northwest of the base seems largely untouched, which is why one of the planes was shown on video launching from the base within the same day. 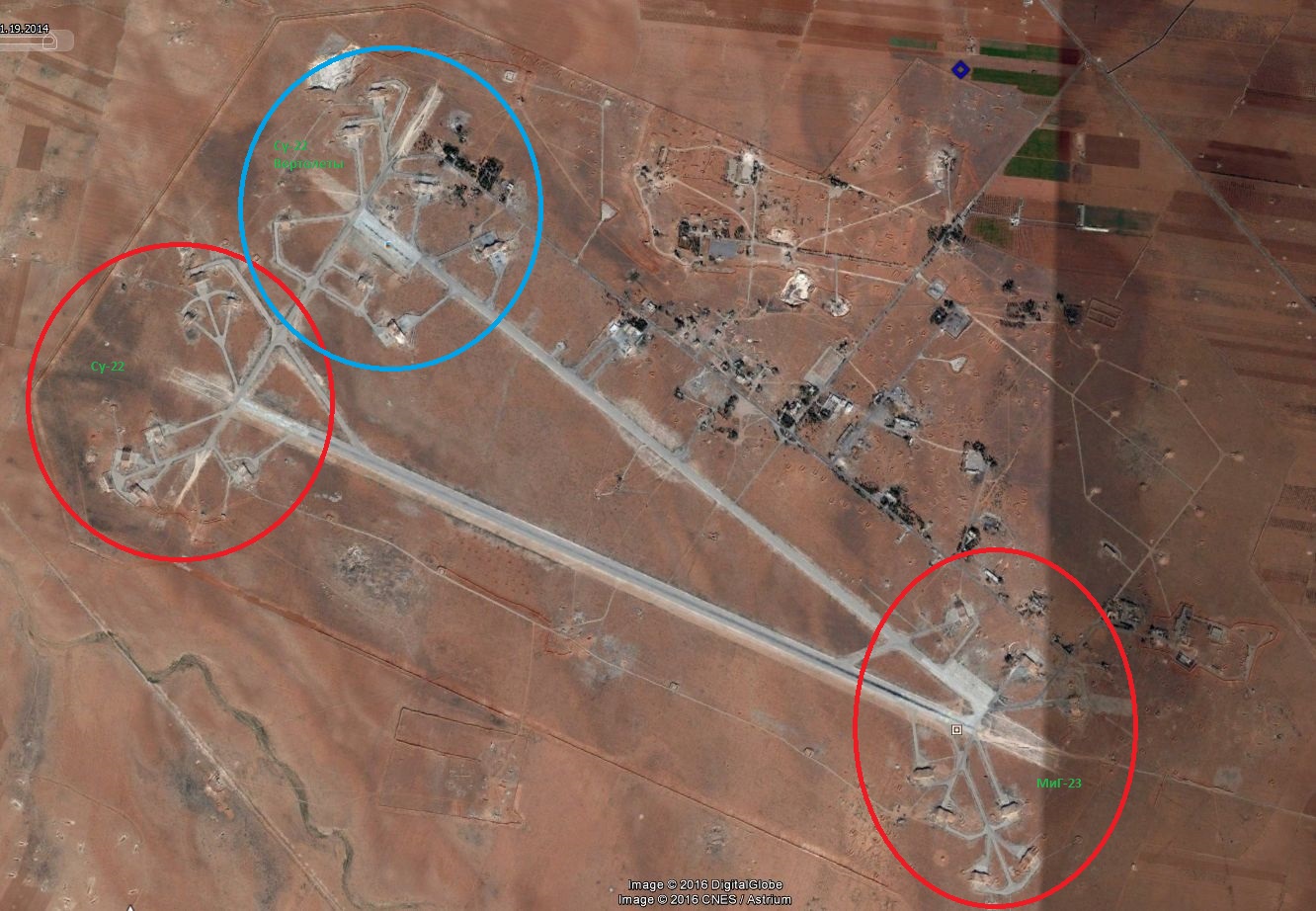 Additionally the missiles took out a SA-6 radar site (Kub), some ground equipment, and what was first described as a M-600 missile launcher (Iranian produced SRBM). Bunkers, fuel, ammunition and general stores were also hit. Although there were early rumors on twitter suggesting that there were visible containers of chemical weapons, these proved to be nonsense, and were actually generic containers for cluster munitions and other types of ordnance (twitter experts best experts). The runway was left untouched since it is quite long, simple to repair, and plugging cruise missiles into runways is not the most efficient use of the weapon.

What wasn’t there? Su-24Ms that Russia had recently handed over to Syria, which are much more capable than the aging Su-22 bombers, and actual Russian aircraft. Back in April 2016 this base was being used as a forward operating strip for Russian attack helicopters during an earlier phase in the campaign. Supposedly some Russian personnel were at this facility, but that story increasingly sounds like a guesstimate. 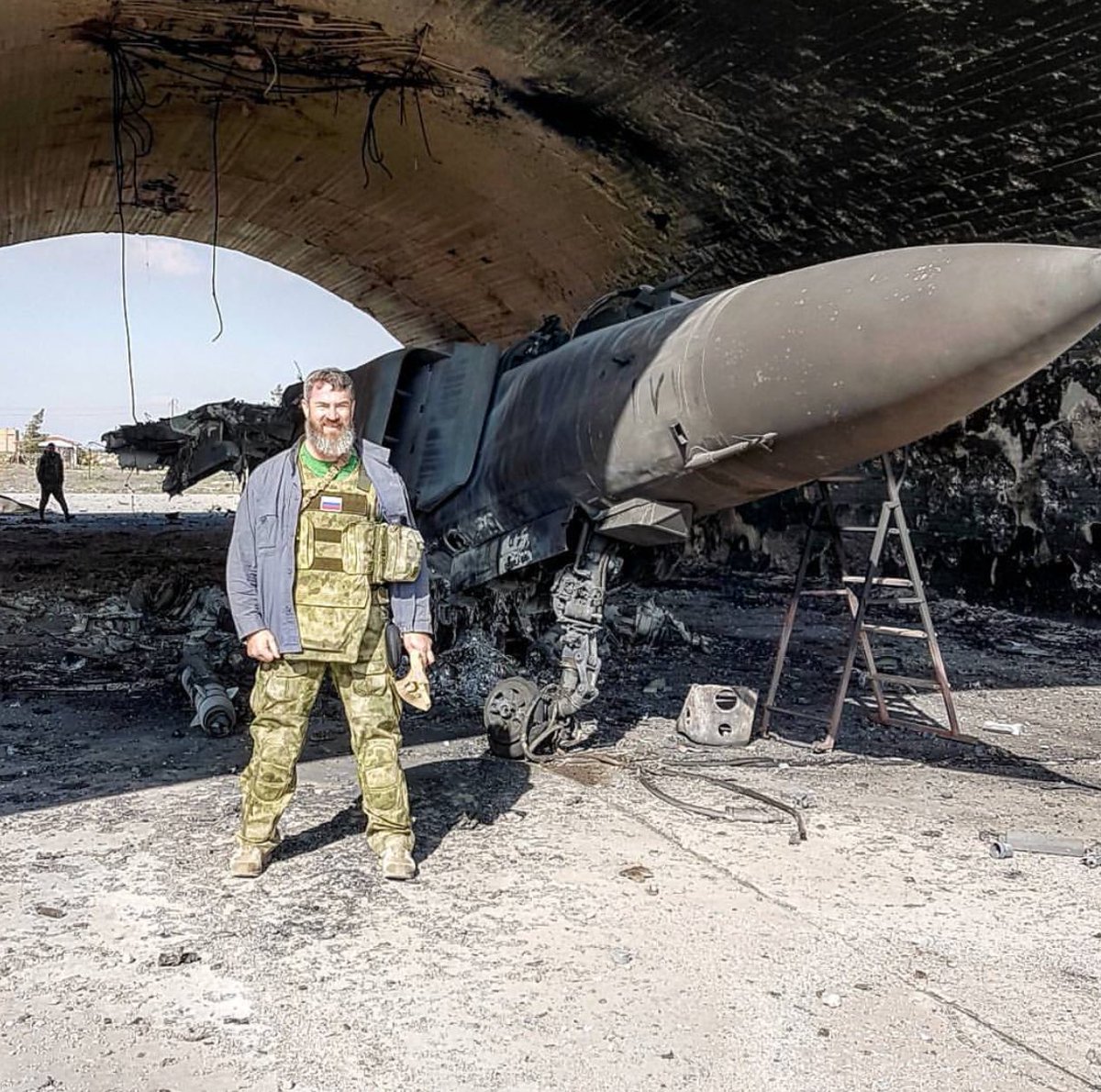 The short answer is that their air defenses were meant to defend Russian forces, not Syrian assets, and probably not armed to take on a 60 cruise missile salvo anyway. The primary Russian fear was that a country like Turkey or someone else might hit concentrated Russian assets in Latakia. From their positions these air defenses probably had little to no chance of hitting cruise missiles meant for a different airbase, and the U.S. likely routed the strike package in such a way so as to make it impossible.

There is an often spotted S-400 system at Hmeimim Air Base in Latakia, together with Pantsir-S1 short range air defense and medium range point defense Buk systems (not many photos of the Buk but supposedly its there). The common depiction of the S-400s capabilities is also pretty inaccurate.  For one, it does not have a 400km range missile (the 40N6). That long range missile has never been seen in operation, nor a new canister for it, which suggests it’s still not ready for prime time. So the actual maximum range is 250km, which still makes it a great system, but cuts down on the imaginary 400km firing ring. Furthermore the system is at the airbase, and there is a mountain range running north to south just east of Latakia, so naturally the radar is going to have a hard time seeing most of eastern Syria – and the Russians have admitted as much in their own press.

Last year Russia deployed a S-300v4 to Tartus (often confused for S-300VM or Antey-2500). This system is designed for intercepting missiles and large aircraft at long ranges. Unlike the S-400, which does not have a 400km range missile, this one actually does though it’s not designed for cruise missile interception. However, unlike the S-400 which is regularly seen in pictures and satellite imagery, the S-300v4 remains elusive, either because nobody is looking at Tartus or because it’s moving about.  Either way it was doubtfully well placed to do anything about this strike.

In either case, these systems and their attending short range brethren might do well if cruise missiles were fired at them or close to them, but not at some other facility, especially if they hug the ground and use terrain masking. It’s possible Russian electronic warfare systems might have affected the guidance system, but these would have to have powerful ranges and why give away many of the system’s technical capabilities on behalf of the Syrians? Hence Russian air defenses, despite being painted as a giant red circle in news coverage are actually quite limited in what they can do against cruise missiles fired from an unknown point, headed on an unknown trajectory and towards a target they’re not intended to defend.

Update: posted flight path of cruise missile strike from Russia’s Izvestia – not vouching at all for veracity, but good map showing how the strike package may have been directed specifically away from air defenses. I would not use this as a hard source on the flight path.

Closing out with a Fateh-110/M600 missile launcher at the airbase that’s seen better days. There is some debate on whether its really a Pantsir-S1. Syrian mod Fateh looks very similar in chassis to the Pantsir-S1, but on Pantsir jacks are behind 2nd wheels set whereas Fateh 1st, and the destroyed vehicle’s jacks are clearly behind the first axle.

Thanks to coverage from diana_mihailova and BMPD blogs, also easiest place to get access to damage photos.