After a few requests I’ve decided to do a quick take on the skirmish outside the Kerch strait between Russian border guards and the Ukrainian navy which has flooded the news.

On November 25th Ukraine’s Navy attempted to execute a planned transfer of two small armored artillery boats (Gryuza-M) and a tugboat from Odessa to Berdyansk in the Sea of Azov (through the Kerch strait). There are already two armored boats there, which were transferred inland, and a supporting ‘command ship’ was towed by the Ukrainian Navy earlier this fall through the strait. That transfer went unmolested though not without some publicity, and quite likely Ukrainians expected the same scenario – a grant of innocent passage an uncomfortably close escort by Russian patrol ships through the strait.

Ukrainian Navy’s first foray to establish a naval base inside the Sea of Azov, towing the command ship in.

On approach they twice radioed the Russian FSB Border Guard of their intention, but did not receive a response confirming passage. Upon arriving at the strait they were told the waterway was closed for security reasons, though no international notice of closure was filed by Russia, i.e. it was closed just for Ukraine’s small trio of boats. Then Russia’s coast guard ordered them to cut engines. A series of maneuvers ensued outside the strait.

One of Russia’s larger patrol ships, the Don, struck Ukraine’s tugboat (which actually appeared to cut engines and sit still)

Then he struck his flanking partner, the Rubin-class patrol ship Izumrud. Russia’s border guard service didn’t upload any videos of this one, but we will have to imagine what it looked like on the basis of the hull damage.

Someone hit him really high, about the height of the Don patrol ship

Russia blocked the bridge passage with a cargo ship. At first media got confusing reports that Ukrainian ships were let through, but actually it was a Russian minesweeper leaving the Sea of Azov. Then a pair of Ka-52 helicopters and two Su-25s appeared over the bridge to provide support.

After waiting for a boarding party of special forces (type unclear), Russian vessels pursued the Ukrainian ships, and a brief firefight ensued. Russians claim this was in territorial waters, Ukrainians claim it was not. Part of the contest may be rooted in whether or not you consider Crimea to be Russian, because a number of legal considerations stem from that position. Ultimately this was settled via 30mm automatic cannon. Russian patrol ship Izumrud opened fire with its AK-630 on the small armored boat Berdyansk, hitting it with 30mm high explosive rounds judging by the battle damage. The rest of the ships may have surrendered without a fight, and were taken back to Kerch port.

Holes in Berdyansk. Armor casing didn’t seem to hold the HE

The Sea of Azov is a shared territorial water governed by a bilateral 2003 agreement and international treaties. Ukraine is entitled to innocent passage for military ships through the strait and does not have to present itself for Russian permission. However, since Russia annexed Crimea and built the bridge (officially opened in May) it has been asserting itself as de facto sovereign over the entirety of the strait, and imposing an informal inspection regime over maritime traffic. This has strangled commercial traffic to Ukraine’s port of Mariupol, and the bridge itself is too short for certain types of ships. In practice that bridge means that Russia can physically block whoever it wants from sailing into the Sea of Azov, and there’s not much Ukraine can do about it (equally skeptical on NATO’s options).

Ukraine likely sought to contest Russian efforts to impose a new status quo, establishing sovereignty over the strait and steadily clinching its grip over the Sea of Azov. Moscow wanted a public demonstration of the true balance of power. The clash on November 25th was brewing for some time – Russia’s Navy transferred ships from the Caspian Flotilla over the summer to the Sea of Azov, and Ukraine’s Navy was slowly doing the same via inland routes.

That said, this incident is the result of Russian adhocracy at its best, from the improvised decision making, to questionable seamanship, salty language on comms, and a lot of ‘who is where and doing what now?’ discussions. It strikes me as a poorly coordinated effort more than some brilliant trap laid for the Ukrainian Navy. Russian forces responded quickly, but they were reacting to the Ukrainian naval group – trying to make it appear a Ukrainian provocation and then improvising from there. One could argue otherwise, but then it begs the question why Russian special forces, helicopters, and aircraft were not already in the air and ready given they could have spent over a day tracking Ukrainian ships in transit.

Subsequently Ukraine’s government has imposed a partial state of martial law (30 days), for 10 provinces. I’m personally skeptical of the military utility or wisdom of Ukraine’s decision on imposing martial law, and side with those who think this is more political than anything else, but that’s another matter altogether. Meanwhile Russia is likely to trade the crews back after using them for PR. According to some blogs there were SBU counter-intelligence officers aboard the ships, which Moscow might hold to trade for its own intelligence personnel down the line, i.e. they will be convicted in some show trial and held for barter. 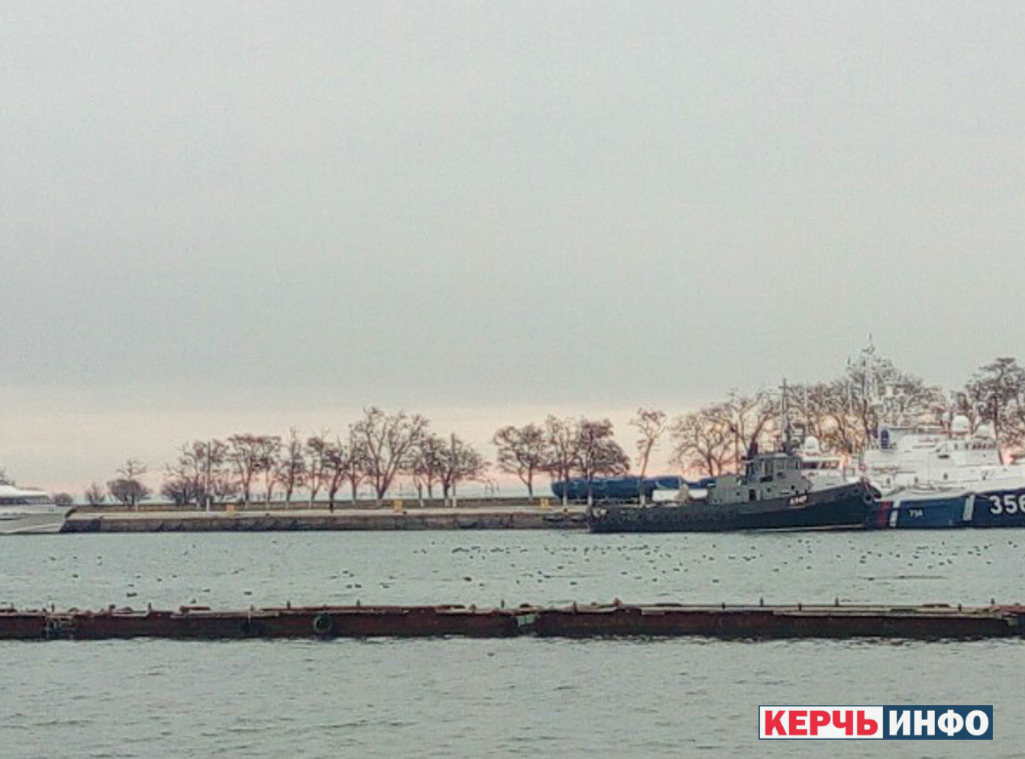