Russian and Chinese leadership at Tsygol range opened up Phase 2 of the exercise with a large review of forces. The optics were clearly meant to rekindle the images of Zapad-1981, with numerous vehicles and infantry arrayed in parade formation on the grounds of the range. Indeed the display was quite large, and it seemed clear by the number of Chinese tanks, SPA, wheeled and other vehicles that probably about 3,000 troops and several hundred pieces of equipment did actually come to join Russia in these strategic maneuvers. Judging by the reporting, it is likely most of the drills during Vostok are taking place at Tsygol and Telemba, i.e. it’s quite difficult to picture Vostok being all that large as an exercise. Right now, going off of fairly little (but still a lot more honest than 300,000), around 50,000 seems a much more reasonable number of participants.

DigitalGlobe had good satellite photos of some of the parade grounds at the range and exercises for a different perspective.

Of course Putin came to look through binoculars, because it wouldn’t be a strategic exercise otherwise. Note unlike in Zapad, where Putin and Lukashenko were not together in the same command center, we can see the Chinese counterparts sitting further along the table. 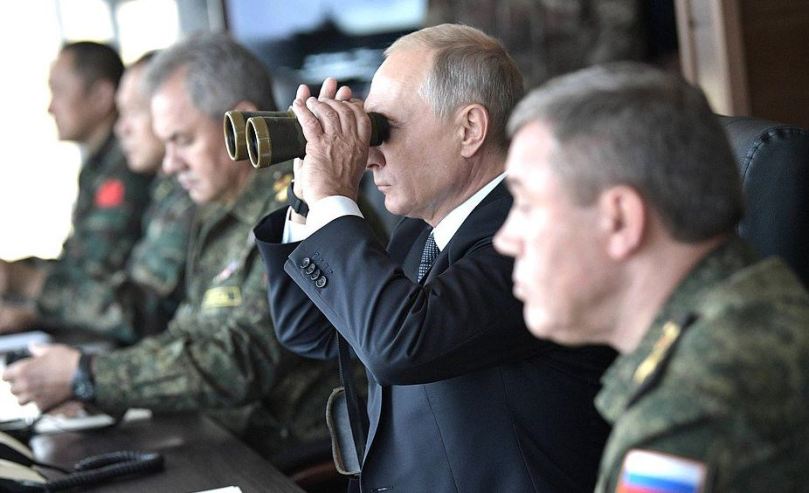 More photos can be found on BMPD. But here’s s sample of some of the gear Chinese brought with them. 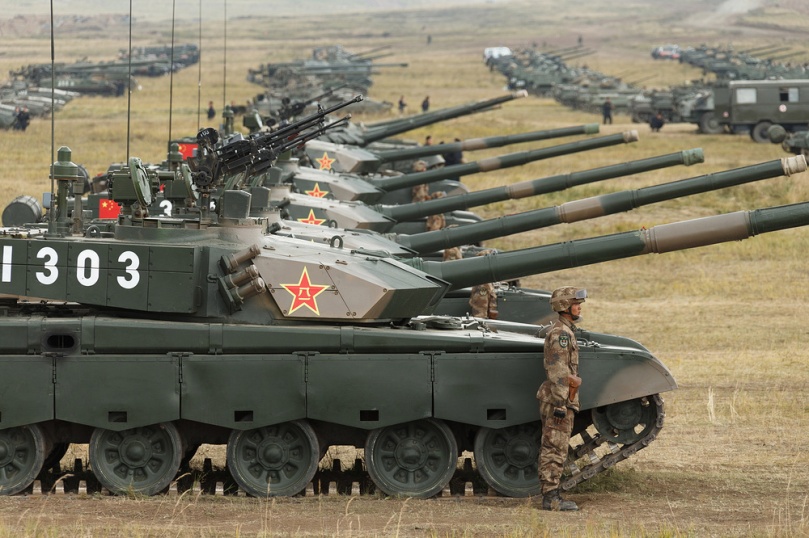 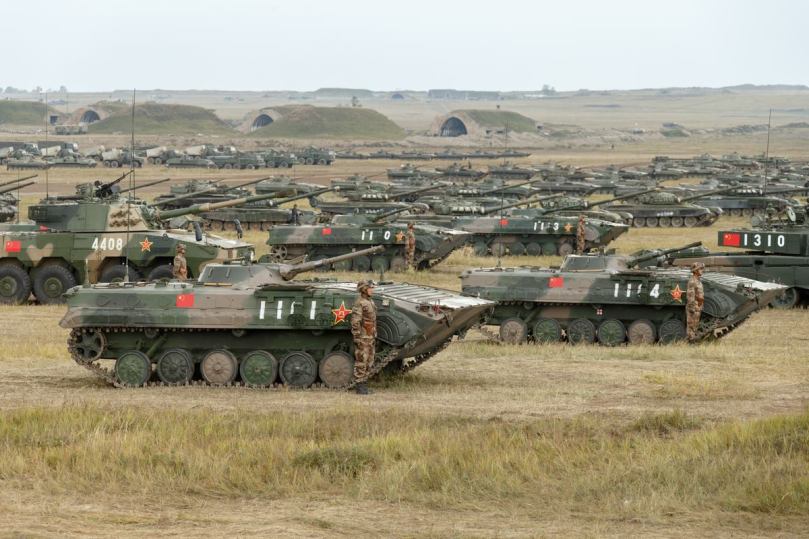 As this is the opening of Phase 2, most of the activity was characterized by VDV air assaults, VKS bombing missions, combined arms artillery and motor rifle unit actions. Strong emphasis on employment of drones, integrated C2, and more ‘jointness’ so to speak between ground, airborne, and VKS forces. VDV seems to be conducted several force structure and air assault experiments, including with new light high mobility vehicles, creating a air mobile reserve, etc. Ground units are mostly doing what they do best, lots of artillery and MLRS fire, armored assault, etc. 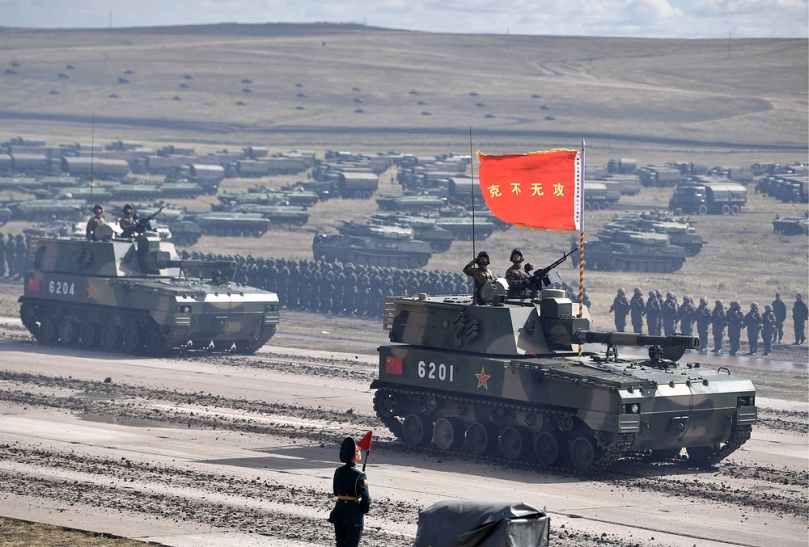 VDV Airborne – More than 700 soldiers and 51 vehicles (BMD-2) made a parachutte jump at Tsygol range. At the Belaya airfield near Irkutsk, a detachment of the Ulan-Ude air assault brigade loaded 25 Il-76MD transports. They were then air lifted ~1000km towards Zabaikal where they conducted a jump at 600 meters. The scenario was air assault and seizure of an enemy airfield. All together about 6000 VDV  and 900 pieces of equipment are taking part in Vostok, in earlier posts I mentioned these are units from 3 independent air assault brigades, and two additional special detachments. 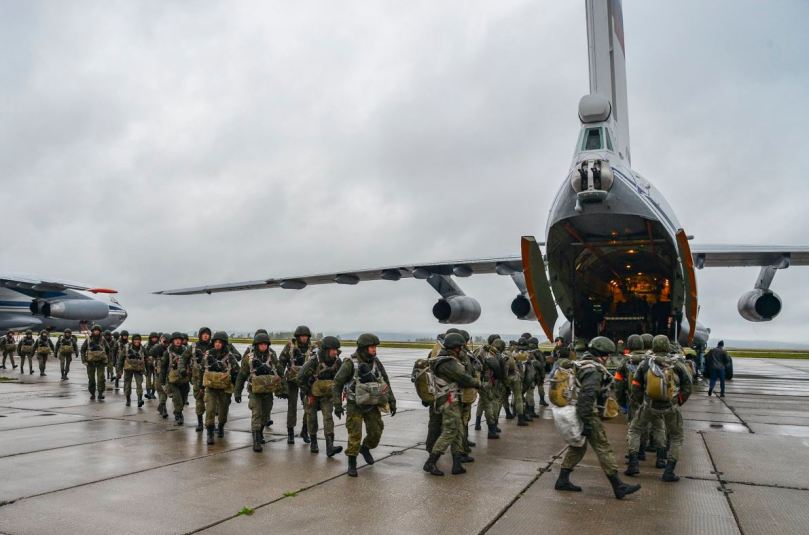 As part of the scenario unfolding at Tsygol range, an air mobile battalion belonging to the 31st independent air assault brigade conducted an air assault on an enemy command center, with air support.  About 40 helicopters of Mi-8AMTSh were used (supposed capacity 26 soldiers), two Mi-26 helicopters, and more than 10 Mi-24 helicopters in support. They are billing this exercise as an experiment of a ‘new type’ of air assault detachment. There was also a mobile reserve in support of this assault, composed of light wheeled high mobility vehicles (pickups). Mi-26s delivered 8 of these light pickups, together with 4 armored Rys light vehicles equipped with Kornet ATGMs and Kord heavy machine guns. 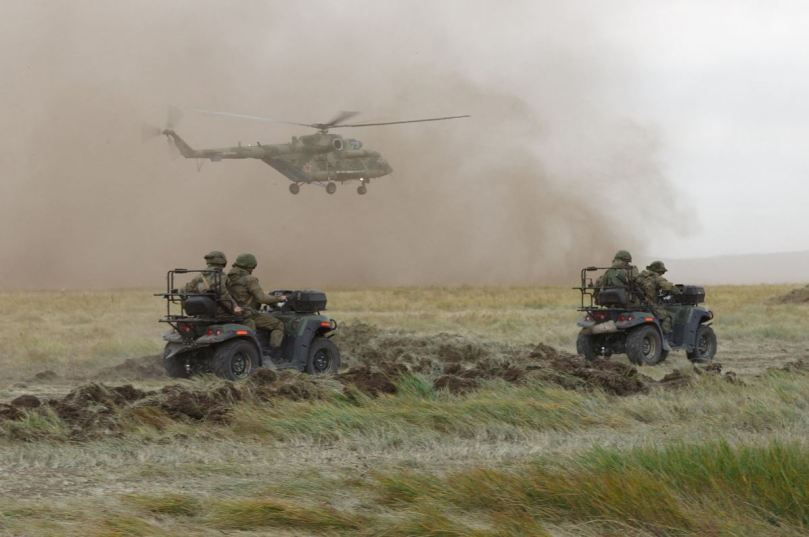 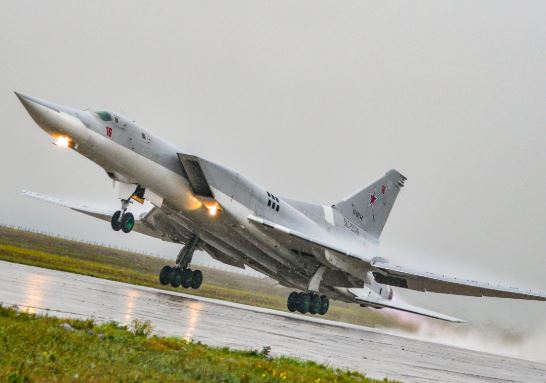 Tsygol Range – Seven artillery battalions created a rolling artillery barrage ahead of an advance, covering a line of ~3000 meters. A motor rifle battalion advanced, and there are photos of host of T-72B1 tanks engaged in a live fire exercise as part of this maneuver. They employed more than 150 pieces of artillery, including 2s3, 2s1, 2s19, Giatsint, and Pion. Meanwhile Iskander-M units fired two cruise missiles at critically important targets, at the same time a large artillery and MLRS barrage hit the opposing force. All together they employed 2 Iskander TELs, 52 MLRS systems, and 72 tube artillery. Targeting for the strike conducted via an air based system called Klever, with Su-24MP recon aviation, and Orlan-10 drones – they used live video feed for battle damage assessment. In one scenario, Russian and Chinese artillery units simultaneously attacked enemy forward command posts. Russian BM-27 Uragan were employed together with Chinese Type-81 MLRS. 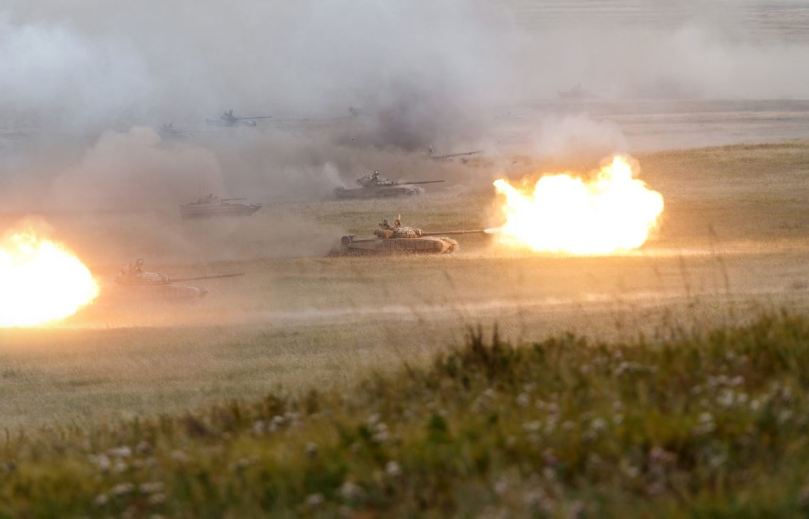 Artillery units will also practice employing precision guided munitions called Krasnopol, these will be fired by MSTA-S and 2s3 Akatsiya, Granat-4 short range drones are to be used for targeting. Krasnopol is a 152mm semi-active laser guided munition which can be used by most self-propelled and towed artillery. 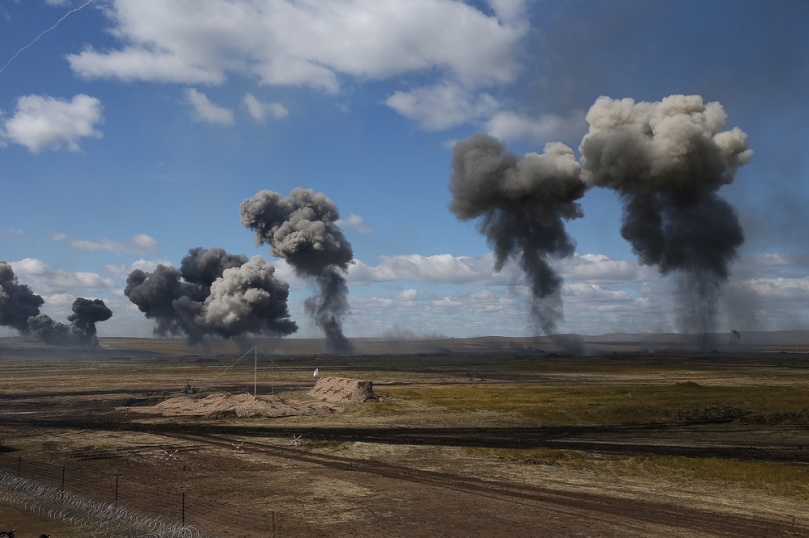 Of course a detachment of Terminator BMPT, heavy tank support vehicles will make another debut at Tsygol, undoubtedly in the hope that someone will buy them. They were first  featured in Zapad 2017 in desert camo paint, undoubtedly marketed towards a certain set of countries that like to buy equipment in such colors.

Interesting photos emerged of drone companies, fielding both Orlan-10s, but also counter drone hand held weapons, that are worth noting. 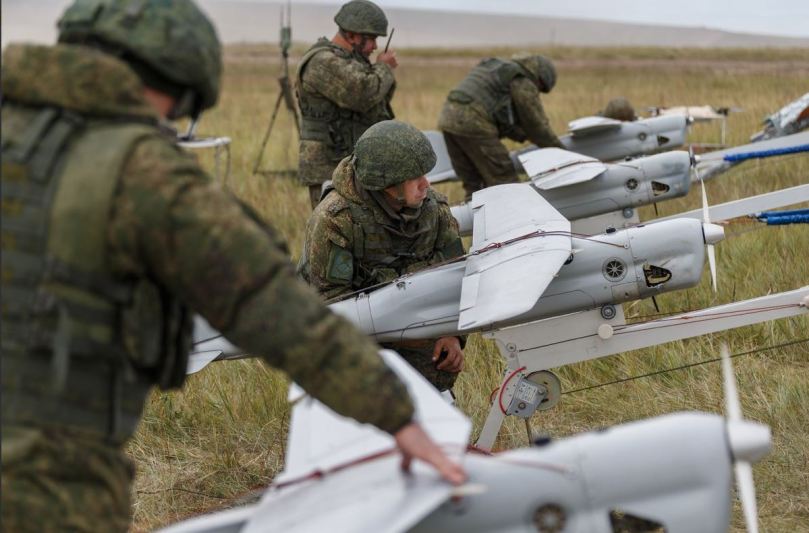 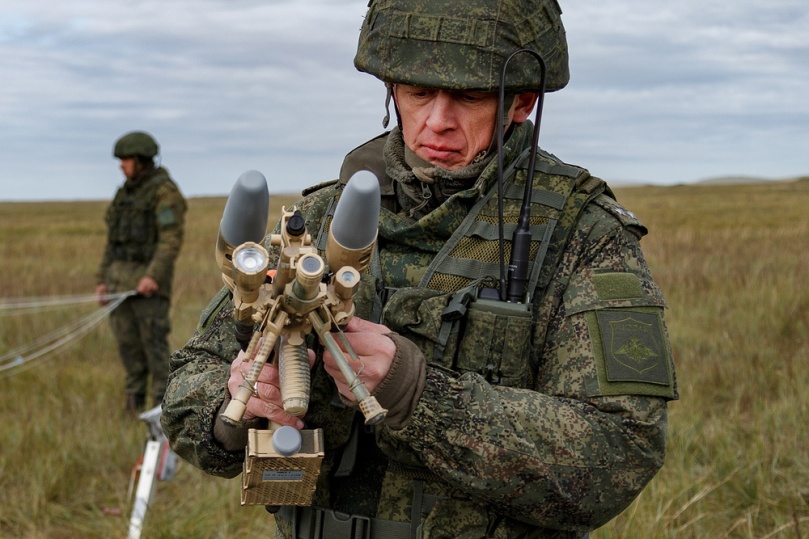 Not much from the two fleets today, except that the squadron in the Eastern Mediterranean is still there, and recently concluded a first time joint exercise with Russian VKS. A sizable grouping of ships and a few submarines remains there.

Some additional photos of note: 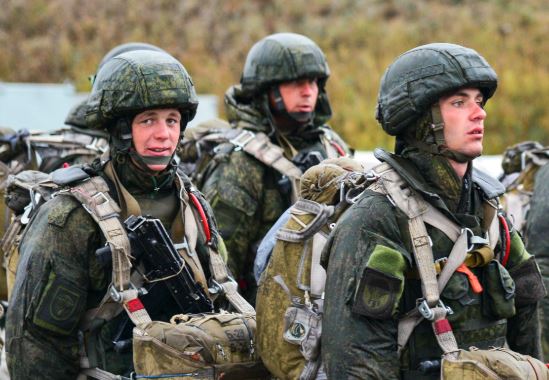 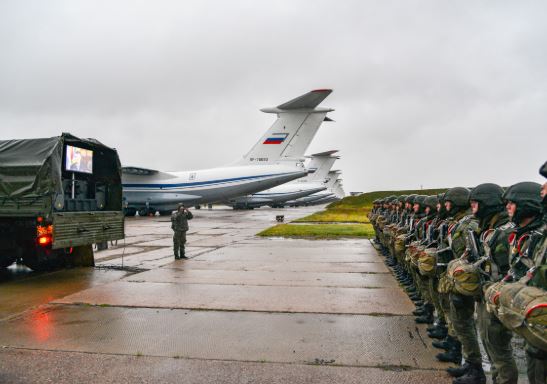 And a time honored tradition emerging from modern exercises, people pointing at screens: 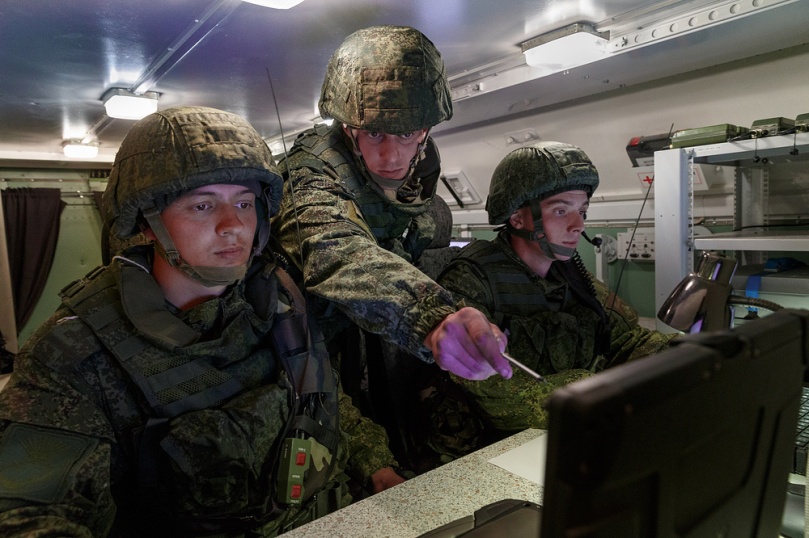